Videos show Portland police removing barricades and disbanding a nascent ‘Autonomous Zone’ set up by protesters in front of the mayor’s home after activists’ demands were not met at a city hall meeting. 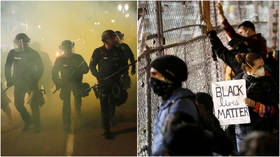 Demonstrators set up a row of barriers outside Mayor Ted Wheeler’s apartment on Thursday morning, but Portland police officers had little patience for the project, moving in quickly to tear them down after declaring the gathering a “civil disturbance” at 5:30 a.m.

PPB is declaring a civil disturbance and unlawful assembly from NW 11th east to NW Park Ave and NW Irving south to NW Everett St. If you do not live inside a dwelling in this area, leave immediately to the west. If you do not leave you are subject to arrest or use of force.

Around two dozen officers showed up to the scene in full riot gear to dismantle the barricades, as seen in footage obtained by local channel KATU News.

#BREAKING: @PortlandPolice just declared the #PKAZ in Portland a “civil disturbance and unlawful assembly” in the Pearl District. Our @KATUNews cameras caught officers showing up.From PPB: “If you do not leave you are subject to arrest or use of force.” pic.twitter.com/Lb3TilltBp

Police closed the area off and began disassembling the makeshift barriers, arresting some of the protesters in the process, according to Portland PD.

Officers are clearing the closed area. Arrests are being made. Leave the area immediately or you are subject to arrest or force. Residents in the area shelter in place.

Our @KATUNews cameras caught @PortlandPolice tearing down the #PKAZ barriers in Portland’s Pearl District. These were set up overnight as an ‘Autonomous Zone’ reportedly outside Mayor @tedwheeler’s condo. PPB: “Leave the area immediately or you are subject to arrest or force.” pic.twitter.com/uhdI4meOUb

Asked by local reporters whether he supports the creation of such an encampment, Mayor Ted Wheeler was unequivocal, stating “I do not want an autonomous zone set up in Portland.”

“I’m watching what’s going on in Seattle, and I’m not impressed. I think it’s a distraction from the larger movement, and the movement is justice for black people,” Wheeler said, voicing concerns over reports from Seattle about armed protesters and the extortion of local businesses.

Portland Mayor @tedwheeler was in the Pearl District this morning after PPB cleared an area that protesters had deemed an autonomous zone. Wheeler was asked if he’d support such an area being established in the city, here is his response #LiveOnK2pic.twitter.com/zGRKVeJvqI

The decision to create the autonomous zone came after the Portland City Council approved a new budget that slashes about $16 million from the Police Bureau’s funding. The move failed to appease the protesters, however, who had called for a whopping $50 million cut.

On the night the blockade was erected, 27-year-old Anthony Eaglehorse-Lassandro drove his car into a group of protesters, injuring three people. Police say they later tracked down the driver, who’s been accused of hit and run, reckless driving and possession of a controlled substance, though his motive still remains unclear.

Elsewhere in the US, protesters have tried to establish similar autonomous zones, hoping to follow in the footsteps of a loose band of anarchists and Black Lives Matter activists in Seattle, who’ve occupied a six-block area since early June. The enclave – now ‘officially’ dubbed the Capitol Hill Occupied Protest, or CHOP – surrounds the Seattle Police Department’s East Precinct, which was abandoned under orders from city administration amid the ongoing demonstrations. So far, Seattle officials have shown little willingness to kick the protesters out, despite complaints from the police that the CHOP has interfered with their work.

The US has been gripped by a wave of demonstrations and civil unrest since the death of George Floyd, an African American man killed at the hands of Minneapolis police in late May. Protesters first took to the streets after seeing disturbing footage of Floyd’s last moments alive, pinned to the ground under an officer’s knee for nearly nine minutes. The protests have spiraled out of control in some cities, seeing indiscriminate rioting and looting.

Starting with calls for police reform, the protesters’ demands have quickly grown. While the officer who killed Floyd is now on trial for second-degree murder and President Donald Trump has rolled out an executive order discouraging police chokeholds, calls to defund and outright abolish police departments have only gained momentum. Trump, however, has made it clear that such proposals are out of the question, instead calling to increase police resources around the country.