Chaotic scenes outside Portland’s federal courthouse were given a snarky soundtrack by a demonstrator who showed up to the fracas armed with a stereo. The city has seen nightly clashes between police and protesters. 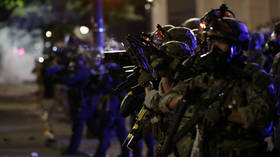 Footage taken by New York Times correspondent Mike Baker shows activists and federal agents fighting over control of a fence guarding the building in downtown Portland, which has been under siege by demonstrators for nearly two months.

Protesters used projectiles and laser pointers against federal law enforcement tasked with protecting the courthouse, who in turn deployed tear gas to keep the mob at bay.

During the skirmish, one protester deployed a loudspeaker hooked up to a car to blast out the iconic ‘Imperial March’ from ‘Star Wars’, presumably as a cheeky way to paint police as Darth Vader-serving stormtroopers.

The feds go on the offensive while protesters play the Imperial March on a speaker. pic.twitter.com/5mHUDIccRo

The music can barely be heard amid the shouting and chaos on the street. Protesters are seen hurling objects over the fence and shining lasers as clouds of tear gas drift through the air.

Federal agents in the city have been accused of using illegal methods to seize and detain protesters, with House Speaker Nancy Pelosi even describing the law enforcement personnel as “stormtroopers.” The Department of Homeland Security and other federal agencies operating in Portland have denied any wrongdoing.