A section of the US-Mexico border wall in South Texas has reportedly failed to withstand the power of nature, collapsing under the strong winds of Hurricane Hanna, and sending President Trump’s critics into overdrive. 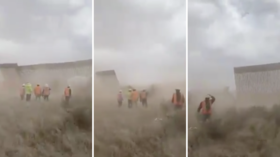 “For the fury of nature, there are no borders,” wrote Yadith Valdez, who was among the first to share a viral video that apparently shows a part of the border fence between the United States and Mexico going down.

I have a Trump wall joke but it will fall apart before it’s finished https://t.co/sCddVD9C85

The US President’s many critics rejoiced, seeing it as divine intervention and an omen of an imminent collapse of the Trump administration.

While it was not immediately clear where the video was recorded, earlier this month, a privately built section of the border wall in South Texas was criticised for being located too close to the Rio Grande river and already showing signs of erosion just months after going up.

I have a trump wall joke but I know it will fall flat. https://t.co/ZQFBUJMPt2

Trump at the time distanced himself from this particular private construction, even though his administration has awarded the builder a $1.7 billion contract to build more walls.

“I disagreed with doing this very small (tiny) section of wall, in a tricky area, by a private group which raised money by ads… Should have been built like rest of Wall, 500 plus miles,” Trump tweeted back on July 13.

It was only done to make me look bad, and perhsps (sic) it now doesn’t even work.