France’s defense ministry said NATO can’t bury its head in the sand when it comes to Turkey’s recent behavior in Libya. It also accused the Turkish navy of harassing a French warship in the Mediterranean, a charge Ankara denies. 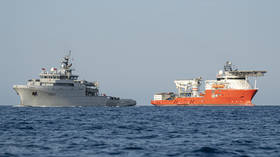 “We have known complicated moments in the alliance, but we can’t be an ostrich and can’t pretend there isn’t a Turkey problem at NATO. We have to see it, say it, and handle it,” a ministry official said ahead of a NATO summit on Wednesday.

According to defense ministry sources, a French ship participating in a NATO mission in Mediterranean waters was recently subjected to aggressive behavior by Turkish frigates, which it suspected of breaking an arms embargo and of transporting weapons to Libya.

As the French frigate queried the identity of the Turkish freighter, the vessels blocked its signal, cut the tracking system, and veiled its ID number. The French ministry described this maneuver as “extremely aggressive.”

“We cannot accept that an ally behaves like this, does this against a NATO ship under NATO command leading a NATO mission,” the official said, warning that the incident will be discussed in upcoming talks with the military bloc’s defense ministers.

Turkey denied the accusation, saying French forces had sought to search a Turkish vessel in international waters, which “was not permitted.” A Turkish official commented that Ankara expects allies “to show the same understanding and sensitivity towards the Turkish navy and its presence.”

Earlier, on Monday, France had called for talks among NATO allies on Turkey’s role in Libya. Paris accused Ankara of thwarting cease-fire efforts by breaking the arms embargo. In response, Turkey slammed France’s “dark and inexplicable” policy on Libya and accused it of intensifying the crisis by providing support to the forces of commander Khalifa Haftar. Haftar recently suffered defeats on the ground against the internationally recognized Government of National Accord (GNA), which is supported by Ankara.

Another point of tension within the alliance derives from the continuing blockage by Turkey of NATO’s defense plan for the Baltic countries and Poland, despite a deal signed by President Recep Tayyip Erdoğan and other NATO leaders last year.

Share. Twitter Facebook Google+ Pinterest LinkedIn Tumblr Email
Previous ArticleIn America, Black deaths are not a flaw in the system. They are the system
Next Article Florida Alligator Attack: Man ‘Looking For Frisbees’ In Lake Bitten In Face By Gator