The head coach is hoping his squad can reap the benefits of all their time together on the training pitch.

THE NOISES COMING out of the Ireland camp have been overwhelmingly positive ahead of tomorrow’s Six Nations opener against Wales [KO 5pm, RTÉ], with the picture painted one of a fitter, smarter, better drilled Irish team.

Problem is, they haven’t had a chance to properly put any of that to the Test, so Adam Griggs can be forgiven for being a little cautious with his starting XV, slotting a just few fresh faces in alongside the more tried and tested members of his squad.

Ireland’s most recent run out was a 21-7 win over Italy last October which was peppered with errors. Much of that, according to Griggs, was down to the fractured nature of Ireland’s season.

Another six months have passed since that game, and while Griggs is hoping the squad can reap the benefits of all their time together on the training pitch, he is also wary that there may be a few areas of their game which need to be put to the test in a match setting.

“I don’t want to hide the fact that it has been another six months since our last Test game,” Griggs said.

“I do expect there will be some mistakes. What we’re trying to highlight and drive is that we don’t let slip our intensity and the tempo of how we want to play.

“Players feel the fittest, fastest and strongest they have been. So we have to make sure we actually put that into practise and drive standards from our side. Against Italy (last year) we were a little bit guilty of falling to the level that they wanted and slowing the game down. We didn’t put them under enough pressure. That’s probably another area we will look to this week as well.”

It is hard to know if Wales will have benefited from last week’s thrashing at the hands of France. A 53-0 defeat will never do squad morale any favours, but they at least now have a competitive game under their belts, something which Ireland have acknowledged no amount of in-house matches can replicate.

Griggs stressed the need for his players to quickly find their rhythm in Cardiff, but accepted that bringing the right levels of intensity is only half the battle.

This is an Ireland squad who head into the tournament determined to play exciting, open rugby.

“We’ve got dangerous back-field players and we have to get the ball into their hands,” Griggs continued.

The other thing is playing on our instincts. We’ve been guilty of over-thinking things at times and I know people talk about heads-up rugby. We can definitely give a framework but then the message is definitely to let your instincts take over and back yourself to play.

“That’s something we’ve really driven in terms of our messages over the last few months as well.”

Griggs’ matchday squad includes a couple of surprises, with no place for the highly-rated Amee-Leigh Murphy Crowe.

However there are three players poised to make their Test debuts, with 21-year-old Eve Higgins named to start at centre while Emily Lane and Stacey Flood are included on the bench.

There is also much excitement surrounding the potential of Dorothy Wall, a dynamic, hugely energetic flanker who wins her fifth cap at openside. 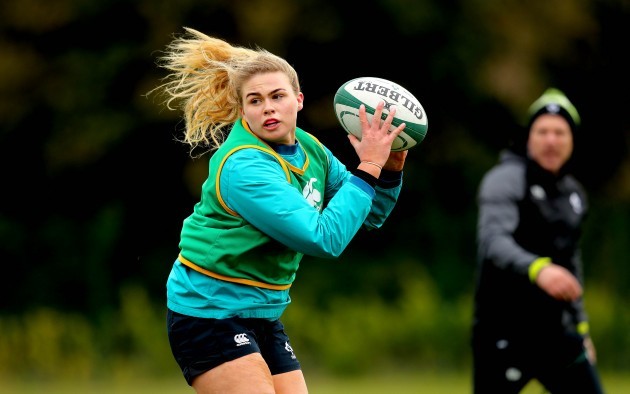 “You can see what she brought against Italy, she has a real physical edge to her,” Griggs said.

“She is quick and very dynamic, and obviously in that back row position, that is key. And the combination there with Claire (Molloy) and Ciara (Griffin), it’s definitely a dangerous trio.”

Wall, like so many of this Ireland squad, came to the 15s game with experience at Sevens.

“I think when you look at the Sevens players transitioning into the 15s game, it is multi-skills. In the Sevens game you have so much time with the ball in hand. There is a lot more contact time. You have to make your one-on-one tackles or you are exposed.

“And I suppose when you put that into a 15s context, and you have 14 other players around you rather than six, that really stands to them.

“I’m a huge advocate for the Sevens game and how it can develop players. And Dorothy has earned her spot there and I’m sure we can see it again on Saturday.”

Murray Kinsella, Bernard Jackman and Gavan Casey look back on a mixed weekend in Europe for the provinces before previewing Exeter-Leinster and Wales-Ireland.