The lingering US protests aren’t just about violence, as they are sometimes painted in the media, they are an uprising against the “cult-like” system of repression and class divides, MeToo icon Rose McGowan has told RT. 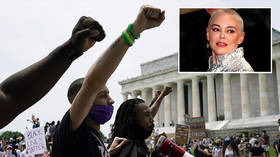 Sparked by the death in Minnesota of George Floyd while in police custody, the popular rage was first directed at police violence, but then evolved into major anti-racism and anti-establishment sentiment. Americans have been living “in a class structure and a repressive system that operates exactly like a cult,” Rose McGowan told RT’s Going Underground show.

It does “a huge disservice to the American public” and “really needs to be smashed, so it’s what’s happening right now in America,” she offered.

“How many hopes and prayers can actually stop this? None,” McGowan said, “If nobody is listening, if the cult leaders aren’t listening, you have to make them listen.”

Once a proud Democrat, McGowan made headlines this spring when she tweeted her disappointment over American partisanship, saying there’s not much difference between the elites belonging to both political camps.

She reiterated this frustration – that came on the heels of the Joe Biden sex assault allegations – on the RT program, insisting that “the cult leaders of America,” whether it’s Republican Donald Trump or Democrat Barack Obama, are “all the same under that cult-like structure.”

The actress and catalyst of the MeToo movement unloaded on the Democratic Party once again, accusing them of attempting to hijack the running anti-racism protest movement. “Democrats co-opt everything, it’s pretty much their thing,” she noted.

McGowan came into the media spotlight in recent days when she made a headline-grabbing comment about the Department of Homeland Security, which listed RT as being part of the so-called “bad actors,” criticizing the US as “hypocritical, corrupt, undemocratic, racist, guilty of human rights abuses and on the verge of collapsing.”

“Proud to be one of the ‘bad actors’ on RT,” she tweeted, sharing a screenshot of a headline about the DHS memo. Speaking to Going Underground this time, McGowan argued that over a half of the people on the planet “think that the United States is being the way they think they’re being portrayed by RT and other bad-acting outfits.”

Watch the full show below.