Given the theatrical quality to much of the civil unrest across the US lately, it should come as no surprise that a man dressed up as the Joker was spotted jet skiing in New York’s East River. 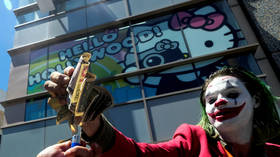 New York is a strange place man. I think I saw The Joker on water today🤣🤣🤣 pic.twitter.com/O9Ry6ANXKh

The villain performed a few deft turns underneath the Brooklyn bridge as, elsewhere in the city, Black Lives Matter (BLM) protests took over several city streets.

The trickster villain’s appearance is the latest blurring of the lines between fiction and reality; the Joker’s arch nemesis, Batman, was previously spotted at BLM protests in Washington DC and in Philadelphia.

Meanwhile, Marvel’s friendly neighborhood Spiderman was also spotted in New York, on the Brooklyn bridge at a BLM protest at the beginning of June, following the death of George Floyd in Minneapolis police custody on May 25.

He was a whole mood pic.twitter.com/ceavcdHWBv

A performative and theatrical air has accompanied much of the protests in the US of late, as the latest anti-police brutality protests drag on into their 64th day. It appears many are hoping caped crusaders can do a better job than the actual police.