Congressman Jerry Nadler has been raked across the coals by social media after insisting that there is no protester-instigated violence in Portland. The lawmaker has spearheaded efforts to discredit federal police in the city. 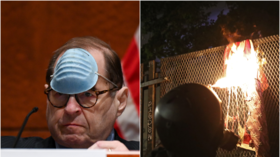 The New York Democrat was approached by pundit and internet personality Austen Fletcher, who asked the House member if he “disavows the violence from Antifa happening in Portland right now.”

“That’s a myth that’s being spread only in Washington, DC,” Nadler responded.

Clearly amused by the lawmaker’s answer, Fletched clarified: “About Antifa in Portland?”

“Yes,” the NY representative shot back as he walked away.

I ran into Jerry Nadler in DC and asked him to disavow the Antifa violence/rioting in Portland. His response? “THATS A MYTH” pic.twitter.com/veImyE2rju

The popular political commenter then urged Nadler to “look online” and watch videos about what’s been happening in the Oregon city. “There’s fires and riots. They’re throwing fireworks at federal officers,” he said. The congressman hurried into a waiting vehicle without responding.

For those who have been watching the nightly clashes in Portland, Nadler’s denial seemed incomprehensible. Prominent podcast host and mathematician Eric Weinstein expressed exasperation over the lawmaker’s comments.

“We are willing to spend all credibility to defend what can be INSTANTLY invalidated. Who came up with this policy, why does it exist, and how is anyone able to maintain it without deviating from the script?” he wrote, including a split-screen video showing Nadler’s denial alongside the chaos unfolding in Portland.

Can someone please explain to me how this works? We are willing to spend all credibility to defend what can be INSTANTLY invalidated. Who came up with this policy, why does it exist, and how is anyone able to maintain it without deviating from the script?pic.twitter.com/K4RFozkQde

Others called on CNN and other mainstream outlets usually eager to jump on any remotely misleading statements made by Donald Trump, to fact-check Nadler’s provocative assertion.

Countless Twitter users responded to the video by sharing footage showing demonstrators hurling projectiles, setting fires, and participating in other activities that would normally be classified as violent.

However, some claimed that Nadler was technically correct, because many of the demonstrators were not directly affiliated with Antifa.

You do realize the part that’s a myth isn’t the rioting in Portland but it’s antifa. You have mom’s, students, BLM, veterans & other individuals participating in the protest. To say it’s strictly an antifa riot is wrong thus a myth.

Although the New York lawmaker seems unconcerned by the protesters’ behavior, he has been a vocal critic of federal agents sent to help restore order in Portland. Earlier this month, Nadler and two Democratic colleagues wrote a letter to the inspectors general for the Justice and Homeland Security departments, in which they called for an investigation into Trump’s use of a “secret police force” to “suppress First Amendment protected activities” in the city.

There has been a noticeable uptick in hostilities between protesters and officers charged with protecting Portland’s federal courthouse. On Sunday, the Portland Police had discovered a bag containing Molotov cocktails and loaded rifle magazines. The demonstrations, which began two months ago, have led to nightly skirmishes between law enforcement personnel and activists.