The star of Britain’s The Apprentice Alan Sugar has said the UK should follow the US’ lead and reopen more quickly from Covid-19 lockdown, citing the fact that he has not died since the lifting of restrictions where he’s staying. 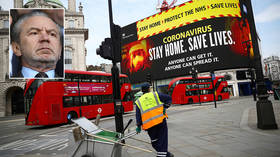 Sugar reasoned that because neither he, his wife nor anyone he knows personally has died from Covid-19, that’s a sure sign the peak has passed and, frankly, it’s time for consumers to get back out there. His argument failed to impress many on Twitter, as his name trended on Thursday with people lashing out at him for seemingly forgetting about the many thousands who have succumbed to the disease.

Speaking to Channel 5’s Jeremy Vine about his time in Florida amid the pandemic, the British peer said he had “lived through the crisis, the shortage of ventilators, the no masks available, the no body-wear available, the hospital beds being full up, blah blah blah.” He then went on to describe how the state began opening up again over a month ago, and pointed out that he has, in fact, not died of coronavirus since then.

This has been going on now for six weeks, and so I just logically say, well hold on, six weeks we’ve come out of this so-called lockdown – who’s dead? I’m not, I’m still alive. My wife, thank God, is still alive, so is everybody else I know – no one else has caught anything.

No nonsense from Alan Sugar @JeremyVineOn5 — Florida, where he is staying, has been out of lockdown for six weeks. “Who’s dead? I’m not.” pic.twitter.com/GkU0ocJGY7

Sugar explained that he has interpreted this first-hand information as “a bit of a clue” that “maybe we’ve reached a peak [for Covid-19 infections]” and so it’s time for the UK to follow America, France and Spain in reopening.

Viewers were quick to roast the businessman on social media for his remarks, pointing out that actually many people have died from coronavirus. One commenter on Twitter branded Sugar “morally bankrupt” for his apparently callous attitude, while another criticized his “selfish billionaire mentality.”

One person angered by his comments tweeted that “mourning relatives will of course be greatly consoled at the news that Alan Sugar tells us that he is not dead.”

Alan Sugar is living proof that a man with skin and a skull thicker than a rhinocerous can become a millionaire:-“I’m not an expert. I’m not a doctor….but who’s died?”#AlanSugar

Others made fun of the underlying logic for his assumption that the worst of the virus has passed and implying the situation is not such a big deal.

“BREAKING: all the people Alan Sugar knows are alive,” one tweeted.

Over 42,200 people have died from coronavirus in the UK, the latest government figures show, though data from the Office for National Statistics puts the figure at over 53,000. The country began gradually lifting its restrictions on June 1 and on a phased basis, with many measures still currently in place.

Florida this week reported both its highest and second-highest single-day increases in new Covid-19 cases.