The bus was set alight after being pelted with petrol bombs.

A BUS HAS been hijacked and set on fire at the junction of Lanark Way and Shankill Road in west Belfast.

The bus was set alight after being pelted with petrol bombs in one of a number of incidents this evening on the peace line street that links the loyalist Shankill Road with the nationalist Springfield Road.

Stones were thrown at police and a press photographer was assaulted during the course of their work this evening.

The events follow days of violence in Northern Ireland with politicians widely condemning the incidents this evening.

Videos circulating online show a bus being hit by petrol bombs and having its windows smashed where a crowd of people had gathered.

First Minister Arlene Foster criticised the actions, saying: “This is not protest. This is vandalism and attempted murder.

“These actions do not represent unionism or loyalism. They are an embarrassment to Northern Ireland and only serve to take the focus off the real law breakers in Sinn Fein. My thoughts are with the bus driver.”

Police are advising members of the public to avoid the impacted areas in west Belfast.

The chief constable of the PSNI Simon Byrne said on Twitter: “The ongoing street disorder must stop. I am open to dialogue with anyone who is willing to work with me to resolve the issues facing our community.

“My message to those engaged in violence tonight is go home before someone is seriously injured, violence is not the answer.” 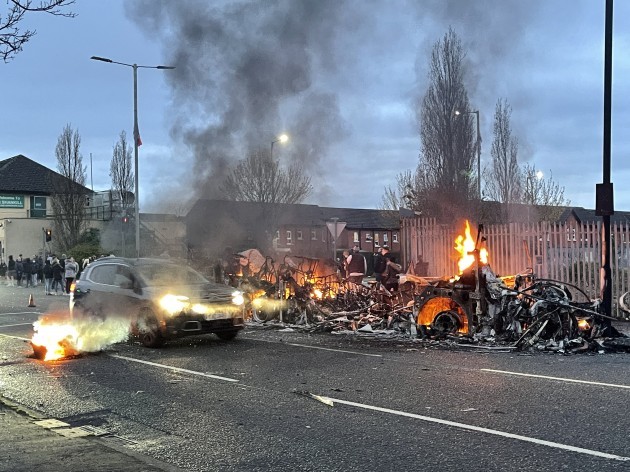 A car driving past the remnants of a Translink bus on fire in Belfast this evening.

Translink Metro said it had withdrawn all services into the area until further notice due to road closures, as well as services in east Belfast.

The CEO of Translink NI, Chris Conway, said on Twitter that the driver of the hijacked bus is “very shaken and being looked after by colleagues”.

UK Prime Minister Boris Johnson responded to tonight’s violence saying: “I am deeply concerned by the scenes of violence in Northern Ireland, especially attacks on PSNI who are protecting the public and businesses, attacks on a bus driver and the assault of a journalist.

“The way to resolve differences is through dialogue, not violence or criminality. The Stormont Assembly is set to be recalled tomorrow morning for an emergency debate following days of violence.”

Deputy First Minister and Sinn Féin vice president Michelle O’Neill said the Executive will be briefed “on the violence and street disorder which is causing huge distress” when it meets tomorrow.

The Minister for Foreign Affairs Simon Coveney has said: “Very disturbing scenes of violence in NI tonight. All people of influence, political and community leaders, have a responsibility to do what they can to defuse tension.”

He added that attacks on “police, journalists and citizens must be condemned by all”.

“There are peaceful, democratic and legal channels to address all issues and concerns. Calm and positive leadership needed from all,” the minister said.

The Minister for Higher Education Simon Harris described this as a “very worrying time”.

“Thoughts with the driver, his family and colleagues this evening. Frightening scenes of violence which so many people worked tirelessly over so many years to end,” Harris said on Twitter.

Michael McGrath, the Minister for Public Expenditure, said the scenes are “deeply troubling”. 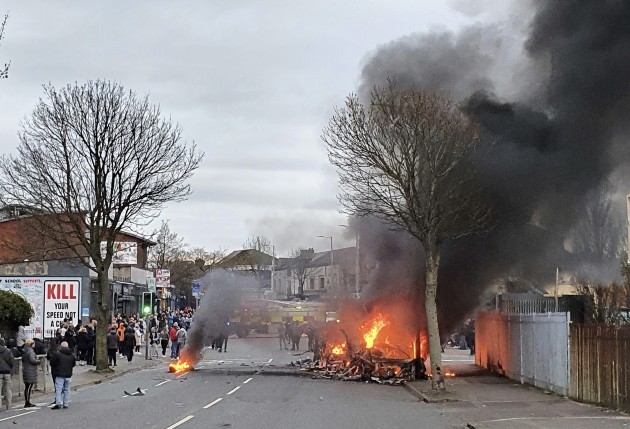 The Translink bus on fire in Belfast this evening.

A crowd of around 500 people, most of them adults, gathered on the corner of the junction at Lanark Way as events unfolded this evening.

Further down the road a bonfire was lit where a crowd of approximately 100 people, mostly young, were assembled.

Riots and attacks on police have taken place repeatedly throughout the last week and have now resumed after a relative lull yesterday.

Police were attacked during another night of violence in a number of loyalist areas on Monday.

Nine officers were injured in Ballymena, taking to 41 the number injured in disorder across Northern Ireland since last Friday night.

Disorder also flared in parts of Carrickfergus, Newtownabbey and Derry on Monday, with petrol bombs and other missiles thrown at officers.

Children as young as 12 have been involved in some of the violence that has been witnessed in recent days.

Cars, a JCB digger, a phone box and bins were set alight in the Waterside area of Derry on Monday.

Police said that a brick was thrown at a taxi, which was carrying a passenger at the time, on the Limavady Road. 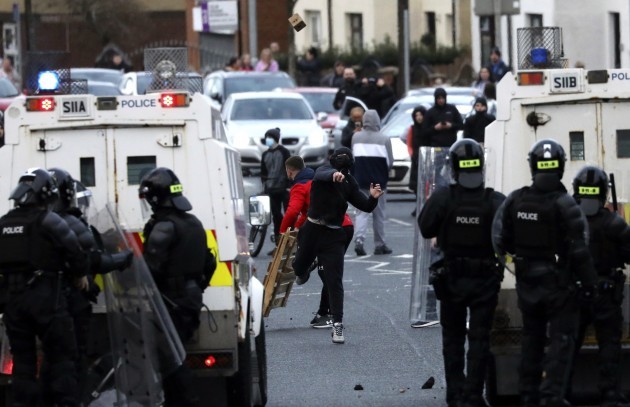 The police had to close roads into the near by Protestant area tonight as crowds from each divide attacked each other.

The cause of the unrest in recent days has been attributed to frustration over a decision not to prosecute members of Sinn Féin over alleged coronavirus regulation breaches at the funeral of republican Bobby Storey.

Opposition to the Northern Ireland Protocol and drugs seizures against a dissident faction of the UDA in south-east Antrim have also been blamed.

The DUP has called for the resignation of police chief Simon Byrne over the lack of prosecutions.

“If people use their heads and they think ahead and say ‘we’re not going to give people the opportunity to say a chief constable can’t stand down because of the threat of violence’,” Campbell told the BBC.

“That is something that would have a resonance across the community. Don’t give them that excuse.

“They should think long and hard before taking part in any protests that could eventually result in violence and serious hurt being done to individuals as well as to the wider community they live in.”