A state agency that has been assisting Atlanta police in investigating the killing of Rayshard Brooks has said that it was blindsided by the charges filed against a former officer amid reports of mass walk-outs on the force. 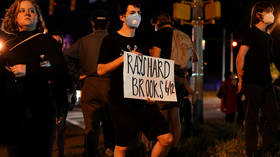 “The GBI was not aware of today’s press conference before it was conducted. We were not consulted on the charges filed by the District Attorney,” the Georgia Bureau of Investigation said on Wednesday.

Noting that they’ve made significant progress in investigating the incident, the agency said that they still need time to finish the job.

Our goal in every officer involved shooting case we are requested to review is to complete a thorough, impartial investigation before we submit the file to the respective District Attorney’s Office.

The GBI released its statement shortly after Fulton County DA Paul Howard announced the charges against former police officer Garret Rolfe, who is facing eleven charges, including that of felony murder for his role in the killing of Brooks last Friday.

Rolfe and his partner, Devin Brosnan were accused of applying excessive force to Brooks during a botched attempt to take him into custody upon finding him sleeping in his car in a Wendy’s drive-through. The incident inflamed racial tensions, as Rolfe and Brosnan are white and Brooks is African-American.

After Brooks failed a sobriety test he resisted arrest, and the ensuing altercation saw him grabbing hold of Brosnan’s taser and firing it in the direction of the arresting officer. In response, Rolfe fired his taser and then his weapon towards Brooks, fatally shooting him.

The Brooks case has added fuel to the fire of the ongoing protests against police brutality sparked by the murder of another black man, George Floyd, in the hands of police officers in Minnessota.

While the parallels were quickly drawn between the two cases, many pointed out that Brooks attacked the officers. However, DA Howard insisted that Brooks had not displayed any aggression towards the officers. Dismissing the perceived threat from a taser Brooks had wrestled away from them, Howard argued the officers should not have used it in the first place.

Many Atlanta PD officers were apparently not happy about the charges, with reports on social media alleging that many of them walked off the job on Wednesday evening.

Officers assigned to at least three of Atlanta’s six zones have walked off in protest of the DA’s decision, reports said.

My contacts in the Atlanta Police Department inform me that members from evening shift Zone 4 walked off the job shortly followed by Officers in Zone 3 and 6. The good members of the @Atlanta_Police will not stand for @FultonCountyDA’s activism in place of applying the law. https://t.co/PDWZNgFeXb

“Atlanta police officers are refusing to answer the radio and walking off of the job. The county can go screw themselves. If you want a society without police we’ll give you one. Let it burn!” reads a note attributed to one Atlanta officer, which has been widely cited on Twitter.  RT has not been able to confirm its authenticity.

Atlanta has reportedly reached out to neighboring jurisdictions for backup, but their officers are apparently refusing to answer any calls except “officer down.”

After mass walkouts among members of the Atlanta police department, the mayor began requesting assistance from mutual aid jurisdictions. Officers from these jurisdictions are refusing to respond to any call other than one for an officer down.

The Atlanta Police Department, however, denied the reports, saying “suggestions that multiple officers from each zone had walked off the job” were “inaccurate.”The APD insisted it has “enough resources to maintain operations and remain able to respond to incidents throughout the city,” while also admitting that it has been overwhelmed with calls.

Earlier suggestions that multiple officers from each zone had walked off the job were inaccurate. The department is experiencing a higher than usual number of call outs with the incoming shift. We have enough resources to maintain operations & remain able to respond to incidents.

The “department is experiencing a higher than usual number of call outs with the incoming shift,” it said.