Piers Morgan has accused the BBC’s Dan Walker of giving Health Secretary Matt Hancock an “easy ride” during an interview. The pair have since become embroiled in a Twitter feud over holding politicians to account on coronavirus. 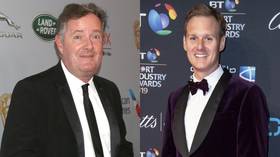 During Tuesday’s episode of ‘Good Morning Britain’, co-host Morgan ranted at Hancock after the health minister had said testing figures were not “meaningful” and “didn’t add anything to the battle against coronavirus” while being interviewed by Walker on the BBC’s ‘Breakfast’.

Morgan fumed: “What could be a more important bit of data than how many people are being tested?” He also slammed Walker for allowing “the health secretary to get away with such blather.”

‘What are you talking about Health Secretary? What could be a more important bit of data than how many people are being tested?’@Piersmorgan reacts to Matt Hancock saying the number of people being tested is not meaningful data in an interview on the BBC. pic.twitter.com/XEbK5EAJ3h

The 55-year-old TV presenter had previously taken to social media on Monday night to express his anger at Hancock for refusing to appear on GMB, amid a government “boycott” of the show during the coronavirus crisis. Nabbing the interview with Hancock was something that Walker had seemingly taken great joy in over on Twitter.

Later on Tuesday, Morgan took aim at the BBC presenter, bluntly telling him on social media: “Mate, you blew it.” The tweet came in response to Walker insisting that any suggestions he or others working for the broadcaster don’t challenge ministers is “completely untrue.”

Walker hit back at Morgan – who has been a brutal critic of the UK government’s handling of the coronavirus pandemic – claiming, “Maybe, if you didn’t make every interview about you, you might get a few decent political guests.”

Mate, you blew it. Calm down. https://t.co/qacdKC3vHz

Not one to leave a spat without having the last word, Morgan insisted the only reason the BBC were able to secure interviews with government ministers was “because they know they’ll get an easy ride.”

You get them because they know they’ll get an ready ride as we sadly saw today… https://t.co/H2kPcI2nZX

Morgan’s savage takedowns of countless ministers have been a major feature on his breakfast show and Twitter feed over the last few weeks. Most recently he lashed out at UK Business Minister Alok Sharma for telling “a bare-faced lie,” after claiming 240,000 people were tested for Covid-19 on June 22.