UK Jewish activists have lashed out at the British chapter of Black Lives Matter over its pro-Palestinian tweets. They say the anti-racist movement’s criticism had anti-Semitic undertones. 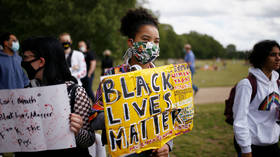 BLM UK posted a series of tweets on Sunday, criticizing Israel over its plans to annex occupied Palestinian territories and calling for solidarity with the Palestinian cause. One of the earlier posts stated that “mainstream British politics is gagged of the right to critique Zionism, and Israel’s settler colonial pursuits”.

As Israel moves forward with the annexation of the West Bank, and mainstream British politics is gagged of the right to critique Zionism, and Israel’s settler colonial pursuits, we loudly and clearly stand beside our Palestinian comrades. FREE PALESTINE.

That particular part prompted a furious backlash from the British NGO Campaign Against Antisemitism (CAA).

“Zionism is the movement for the self-determination of Jews,” CAA tweeted in response. “So-called ‘anti-Zionism’ exclusively denies Jews that universal right and is therefore anti-Semitic.”

“Educate yourselves. You cannot fight prejudice with prejudice,” it added.

BLM responded by posting a series of tweets rejecting the notion that criticizing Israeli policies towards Palestinians equated to anti-Semitism, insisting that “ours is a united fight against colonialism in all its forms. Justice is indivisible.”

We stand with Palestinians at this most urgent time, and against the accelerated attacks on their rights laid out above and in many other sources. Ours is a united fight against colonialism in all its forms. Justice is indivisible. https://t.co/m5iWzwvtUB

CAA accused BLM of bigotry and said it was not the first time they have “had to contend with prejudice from supposed anti-racists.”

“No matter where the hatred comes from, we will always do whatever it takes to defend British Jews,” the group said.

Israel is currently trying to whip up international support for its plans to annex large parts of Palestinian territories as part of the US’ “vision for peace” initiative. The Palestinian Authority has strongly rejected the initiative, while many nations have said the move would seriously undermine the peace process. Some have even called for sanctions against Israel over the plans.