Weighing in on the death of Rayshard Brooks at the hands of Atlanta police, US President Donald Trump called the incident “terrible,” but said citizens should never resist law enforcement, even during a dispute with officers. 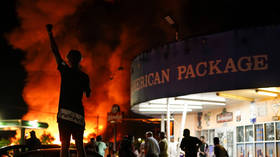 “I thought it was a terrible situation, but you can’t resist a police officer,” Trump told Fox’s Sean Hannity on Wednesday night, adding that the “whole situation was out of control.”

If you have a disagreement, you have to take it up after the fact. It was a very, very sad thing.

President Trump reacts to charges being filed in the shooting of Rayshard Brooks: pic.twitter.com/VtKixg2Lg4

Though the president questioned the version of events put forward by the accused officer, Garrett Rolfe – saying he didn’t “necessarily believe” that Rolfe “heard a sound like a gun” before shooting Brooks – he said he hoped the officer would have a fair trial.

“They’re going to have to find out [what happened]. It’s up to justice right now… I hope he gets a fair shake, because police have not been treated fairly in our country,” Trump said.

But, again, you can’t resist a police officer like that. And they ended up in a very terrible disagreement and look at the way it ended. Very bad. Very bad.

Brooks was killed last Friday after failing a field sobriety test and resisting an arrest by two Atlanta officers. As they attempted to take him into custody, a scuffle broke out during which Brooks seized a taser from one of the officers – Devin Brosnan – and attempted to run away. While fleeing, Brooks pointed the taser in the direction of Rolfe and appeared to have discharged it. Rolfe then pulled out his gun and fired three shots at Brooks, hitting him twice. He collapsed at the scene and later died.

Rolfe – who has since been charged with 11 counts, including felony murder – says he believes Brooks was preparing to draw a firearm, but Fulton County District Attorney Paul Howard has countered that the man “did not pose an immediate threat of death or serious physical injury” to the officers at the time he was shot. Brosnan also faces charges of aggravated assault and violation of oath.

The severity of the charges brought against Rolfe, who now faces a possible death penalty, reportedly prompted some Atlanta officers to walk off the job – however those reports were later refuted by the Atlanta Police Department.

Brooks’ death came amid heated protests around the US over police brutality and racism – at times boiling over into riots – stoked by another officer’s killing of George Floyd in Minneapolis late last month.