Texas Senator Ted Cruz has wagered big money that actor Ron Perlman couldn’t survive in the wrestling ring with Congressman Jim Jordan. The bizarre bet stemmed from a heated row over kneeling during the national anthem. 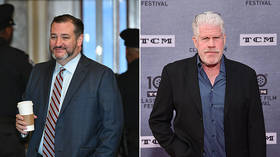 The strange Twitter saga began with a drawn-out, vitriolic exchange between Perlman and a different lawmaker, Florida Rep. Matt Gaetz, after the TV and film star took offense to Gaetz’s assertion that US soccer shouldn’t exist if the players aren’t required to stand when the Star-Spangled Banner is performed.

“The US Soccer team called and you guessed it… said they couldn’t give any less of a f**k about what you two dips**ts think,” Perlman tweeted, tagging both Gaetz and Donald Trump. The US president has slammed the NFL and the US Soccer Federation for dropping a rule that made standing during the anthem mandatory.

Gaetz fired back that Perlman was a virtue-signaling Hollywood hypocrite.

This racial justice warrior had no problem in Hollywood portraying the White Supremacist leader of a motorcycle gang. #SOAhttps://t.co/mKUFz4y5ru

The back-and-forth continued as the pair found increasingly creative ways of insulting one another. Somehow the internet fisticuffs ended up involving Ohio Rep. Jim Jordan – declared by Perlman as the “ugliest” politician in America.

PS: You’re lucky for this guy Matt. If it weren’t for him you’d be the ugliest politician walking. @mattgaetzpic.twitter.com/uUgUDKHgZA

Less-emotional people might take a deep breath at this point and log off Twitter for the day, but for these rivals, the bickering only increased in intensity.

Just as the smoke appeared to be clearing, Cruz dived headfirst into the virtual warzone.

“Listen Hellboy. You talk good game when you’ve got Hollywood makeup & stuntmen. But I’ll bet $10k — to the nonpolitical charity of your choice — that you couldn’t last 5 min in the wrestling ring w/ @Jim_Jordan w/o getting pinned. You up for it? Or does your publicist say too risky?” Cruz wrote. “Hellboy” is of course in reference to Perlman’s Nazi-demon-turned-superhero film, circa 2004.

The bet was clearly designed to favor Jones, assuming Perlman took the offer: The Ohio congressman was a former assistant wrestling coach at Ohio State University.

I tell you what teddy boy, since mentioning jim jordan and wrestling is… problematic, why don’t we say fuck him and just make it you & me. I’ll give 50k to Black Lives Matter and you can keep all the tax payer money you were thinking of spending. https://t.co/6QDwCaEkpv

Cruz’s modest proposal was almost unanimously canned. One observer lamented that “senators and representatives of our government” were behaving like “a bunch of high school bros.”

Others wondered if the Texas senator actually did real work for the money he is paid by taxpayers.

Ted, don’t you have a job we Texans pay you for?

Cruz has a history of making inflammatory and sometimes highly questionable pronouncements on social media. Last year he jokingly confessed to being the long-missing skyjacker ‘Dan Cooper’. The tweet was likely motivated by a long-running mocking rumor that he is the Zodiac Killer.