A spectacular space event of “Mars Eclipse” will take place this coming Labor Day weekend. The moon will be illuminated 86% in the late-night hours of Saturday night or early Sunday morning, Sept. 5 to 6, appearing close to Mars.

People who are unaware of the event will wonder as they catch a glimpse of what appears to be a bright orange-yellow light hovering above the moon on this holiday weekend night. This kind of occasion makes some people call weather offices, planetariums, radio and TV stations, and even police stations to report and ask what is happening.

Some individuals might even mistake Mars as a mysterious UFO closely hovering Earth’s natural satellite vicinity. From the middle of South America and a narrow slice of western Africa, the moon will look like it is hiding the Mars from view, leading to an eclipse for a short period during the predawn hours on Sunday morning.

This space event is called an occultation, the Latin word for “hiding.” The occasion is a rare opportunity to view the moon as it covers a bright planet at night.

For those people at locations where the rare occasion is visible, the upcoming space event is one that they really should not miss. You can find a map of the visibility zone of this “Mars Eclipse” at “lunar-occultations.com,” courtesy of David Dunham of the International Occultation Timers Association (IOTA). 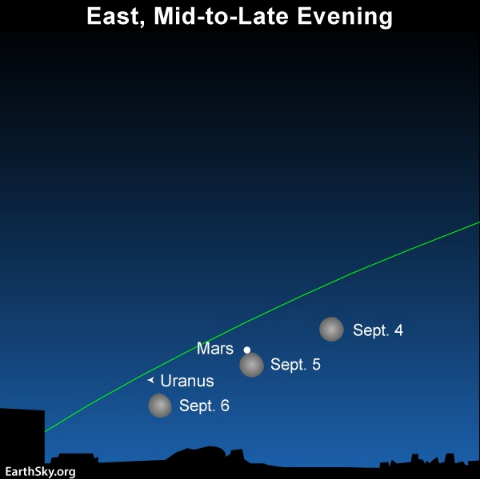 On Oct. 6, the planet will glow nearly twice as bright as it currently does when it makes its closest approach at 38.57 million miles or 62.06 million km.

Also Read: China Secretly Launched a “Reusable Expiremental Spacecraft”: Could It Be for Human Exploration?

Share. Twitter Facebook Google+ Pinterest LinkedIn Tumblr Email
Previous ArticleRio explains how Liverpool need same ‘fortune’ as last term to retain title
Next Article How to claim back up to £63 in tax on energy bills if you’ve been working from home