Ansu Fati, the 17-year-old who was formally made a senior player at Barcelona last week, has shown why the club included a whopping $468 million release fee clause in his new contract after getting their season off to a flyer. 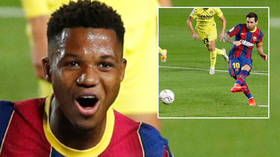 The Spanish sensation has made incredible progress since making his debut for the club last season, becoming the club’s youngest ever goal scorer just a week later and, in the months that followed, the youngest player ever to represent Barca and score in the Champions League.

While all eyes were on Lionel Messi following the turmoil that almost saw the striker leave the club this summer, his precocious pretender stole the headlines by taking just 15 minutes to open Barcelona’s account for the season in spectacular style as they entertained Villarreal.

A perceptive pass by Clement Lenglet began a lightning break for the home side at the Camp Nou, finding wide-man Jordi Alba, who charged inside the penalty area on the left and cut a low pass back into Fati’s path.

10 – Aged 17 years and 332 days, Ansu Fati is the youngest player from the top five European leagues to score 10+ goals in all competitions since the start of last season. Unstoppable. pic.twitter.com/7lG0JtuheT

The teenager still had plenty to do from just inside the penalty area, but the calmness with which he dispatched a thunderous effort beyond goalkeeper Sergio Asenjo was worthy of a seasoned superstar and showed why the club were so keen to ward off his suitors with a huge clause in his new contract.

“Such a cool finish,” marveled one fan on Twitter. “Fati may have a big season ahead of him.”

Just as the plaudits were raining in for Fati’s scintillating strike, he added a second from a similar position following another slick move that began in Barcelona’s penalty area and ripped through the middle of the pitch at pace.

The second goal from Ansu to double the lead. pic.twitter.com/zvO1unnzFb

Ansu Fati is the future

Midfielder Philippe Coutinho hared towards the penalty area before feeding Fati for his tenth Barcelona goal.

He relented for more than a quarter of an hour before tormenting the visiting defense again, winning a penalty and briefly looking like he might complete a 35-minute hat-trick before handing the ball to Messi.

Fati was barely a year old when Messi first turned out for Barcelona’s third team, and the club’s all-time top scorer converted an imperfect penalty to make it four goals in his last three La Liga matches.

How did the keeper not save messi’s penalty 😂 pic.twitter.com/v895YLnzEV

The goal ensured Messi became one of only four players to score in 17 consecutive seasons – a prospect that looked uncertain in late August when he insisted that he wanted to leave the club where he has spent his entire career.

The new youth academy graduate’s impact, meanwhile, was reminiscent of his outstanding performance for Spain against Ukraine in the Nations League last month, when he won a third-minute penalty and scored his country’s third goal as part of a series of dazzling runs cutting inside from the left.

That made him Spain’s youngest ever scorer, and he looked set to be part of an even more emphatic win in Barca’s first game under new coach Ronald Koeman, thanks to a piece of brilliance from Messi just before the break.

La Liga’s all-time top scorer floated a superb cross from the left of center deep into the penalty area, and Sergio Busquets would almost certainly have scored from the opportunity without the intervention of befuddled defender Pau Torres, whose own goal made it 4-0 in first-half injury time.

Barcelona failed to add to the scoresheet in the second half but were largely comfortable throughout as the Koeman era started with a resounding win at the Nou Camp.