The Prime Minister of Italy has asked fans to pray for Alex Zanardi after the IndyCar champ, who won gold as a Paralympian after losing both legs, collided with a truck on his handbike, and was rushed into brain surgery. 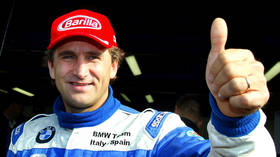 Legendary racing figure Zanardi is targeting another miraculous recovery after being airlifted to hospital in Siena to undergo neurosurgery for severe cranial damage following a crash with a truck on his handbike during a national race for Paralympic athletes near Pienza on Thursday.

Prosecutors have opened a criminal investigation into the incident and the organization of the race following the catastrophic crash with a large truck that hurled Zanardi’s helmet off and left the former Formula One driver’s handbike lying on its side as the ambulance arrived.

“It happened on a slightly downhill straightaway just before a slight curve in the road,” national team coach Mario Valentini told La Repubblica Florence, likening Zanardi to a cat with seven lives.

“It was a sunny day and everyone was happy. We were 12 miles from [the finish line]in Montalcino.

“Alex veered slightly into the oncoming lane just when a truck came. [The truck] tried to swerve but couldn’t avoid the crash. The truck didn’t make a mistake. Alex made the mistake.

“Twenty minutes passed from the time of the accident to when the medical personnel arrived. It took some time to load him [into the ambulance]. His wife helped. After the accident he was talking.”

Surgeons spent three hours carrying out “a delicate neurosurgery operation” on “severe cranial trauma” sustained by the remarkable 53-year-old, who won two CART championships in the US before both of his legs were severed in a horrific accident in 2001.

Zanardi designed his own prosthetics and learned to walk again, becoming a masterful hand cyclist and winning four gold medals and two silvers at the 2012 and 2016 Paralympic Games.

He also competed in the New York City Marathon, set an Ironman record and raced for BMW at the Rolex 24 in Daytona alongside former Formula One champion Fernando Alonso.

Responding to news from the hospital that Zanardi remained in a “very serous” condition, Italian Premier Giuseppe Conte tweeted: “You’ve never given up and with your extraordinary strength within you’ve overcome a thousand troubles.

“Forza Alex Zanardi. Don’t give up. All of Italy is with you.”

Racing great Mario Andretti tweeted: “I am so anxious and frightened about Alex Zanardi that I’m holding my breath. I am his fan. I am his friend. Please do what I’m doing and pray [for]this wonderful man.”