The Premier League’s return from Covid-19 lockdown began with all 22 players from Aston Villa and Sheffield United, as well as the referee, dropping to one knee after kick-off in support of the Black Lives Matter movement. 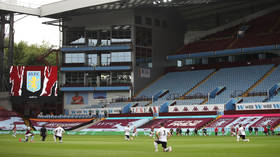 The first English top division game in three months clearly referenced the changes that the world has undergone since a match was last played.

In addition to the various coronavirus restrictions to which we have become accustomed since the Bundesliga resumed earlier this month, the Premier League’s comeback also comes amid a thick atmosphere of ongoing protests against police brutality – something which was immediately referenced in the seconds after referee Michael Oliver blew his whistle at Villa Park for the fixture between Aston Villa and Sheffield United.

As soon as the game was signalled to have started by the referee, every player from each team immediately kneeled for several seconds. Oliver also took part in the silent protest.

Absolute chills. On the blow of the whistle, every player takes a knee. #blacklivesmatter#AVLSHUpic.twitter.com/aqQClODH9m

In addition, players took to the field in jerseys with the words ‘Black Lives Matter’ written in place of their names.

Commenting on the incident for BBC Radio, former Republic of Ireland international Clinton Morrison – who is black – said he was touched by the gesture.

“That was special, that touched my heart,” Morrison said. “I didn’t expect that. You could see it was planned. It was magnificent, credit to both sets of players and staff.”