Prosecutors for the referee attacked by ex-footballer Roman Shirokov will seek to try the former Russia international skipper for attempted murder after his vicious attack on an official left him in hospital for three weeks. 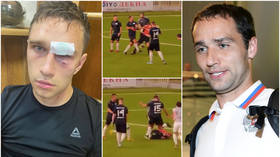 Criminal charges have since been brought against the ex-Russia international after he became enraged when referee Nikita Danchenkov refused to acknowledge what he considered a penalty when turning out in the ‘Moscow Celebrity Cup’ on August 10.

Prosecutors for referee attacked by ex-Russia captain Roman Shirokov will seek to try him for ATTEMPTED MURDEROfficial Nikita Danchenkov spent 3 weeks in hospital after being punched to the ground & kicked in the head by Shirokov in a charity game.pic.twitter.com/kKie4Alk8H

After Shirokov began to threaten the young official, he was shown a red card, which further angered the ex-Spartak Moscow and Zenit St. Petersburg midfielder. Shirokov then dropped Danchenkov with a haymaker before delivering a kick to the head as the ref lay defenceless on the ground.

READ MORE: ‘I’m a father who wants to be a role model’: German defender enters crowd to brawl with fans after wife & daughter verbally abused

Lawyers for 24-year-old Danchenkov reportedly consider the charge of “intended infliction of harm to health” under Article 115 of the Criminal Code of the Russian Federation, which would carry a punishment of community service and a possible prison sentence, too light.

Instead they will seek a charge of attempted murder, which naturally carries a much higher punishment should three-time Russian league winner Shirokov be convicted of the offense, according to Telegram channel Mash.

Danchenkov suffered cuts and bruises to his face and eye and a suspected broken elbow in the attack, and was forced to spend three weeks recuperating in hospital; pictures of his battered face were widely shared in the media, along with a video of the attack.

Shirokov later apologized for his behavior on Instagram, which he described as “an inappropriate act”, but Danchenkov nevertheless decided to press charges.