Jose Mourinho has fired back at rival manager Ole Gunnar Solskjaer after he poked fun at the Tottenham Hotspur boss for measuring the goalposts in Shkendija, Macedonia. 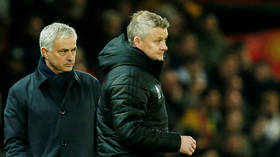 Mourinho demanded the goalposts were changed before Spurs’ Europa League qualifier against Shkendija on Thursday after noticing they were five centimeters too low before the game.

It was a game in which Brighton struck the woodwork several times and which Utd won thanks to a 100th-minute Bruno Fernandes penalty.

Solskjaer said: “We got away with one, to be fair. When they equalized I thought that’s two points lost.

“We have to be grateful Jose is not here to measure the goalposts, it might have been smaller goals.”

Mourinho rose to the bait before his side’s 1-1 draw at home to Newcastle in the Premier League on Sunday, appearing to take a dig at the number of penalties Manchester United have been awarded in recent games.

He said: “I know the goalposts were fine. I think Ole yesterday was so happy and surprised with what happened to his team that he had a joke.

“He would never accept to play with a 17-yard box. I think he would prefer to have a 22-yard box. For him that would be better.”

One fan quipped on Twitter: “Jose is rattled. It was a tongue in cheek joke by Ole. Man, Jose is too negative and feels everyone wants to attack him.”

Another called for Solskjaer to show the self-proclaimed ‘Special One’ some respect.

“OSG is no one compared to Jose. He should show some respect,” they wrote.

OGS is no one compared to Jose. He should show some respect

Spurs beat Shkendija 3-1 in their Europa League tie and will face Israel’s Maccabi Haifa at home in next week’s play off.