Russian UFC champion Khabib Nurmagomedov was reportedly targeted as a foe for pound-for-pound boxing number one Canelo Alvarez, emerging as a “premium” opponent during wranglings over the Mexican’s $365 million contract with DAZN. 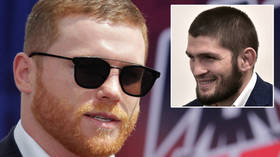 Feared UFC lightweight Nurmagomedov is said to have been named as a star with sufficient box office quality for DAZN, who are involved in a complicated legal stand-off with the four-division world champion after he filed a lawsuit on Tuesday over his lack of activity and numerous other contractual disputes.

Canelo is seeking at least $280 million in damages based on money owed to him, lost sponsorship and gate revenue from the whopping $350 million, five-year deal he signed with the broadcasting giants in 2017.

In what could have been the greatest mismatch of styles since former UFC champion Conor McGregor lost to boxing icon Floyd Mayweather in 2018, DAZN are said to have named Nurmagomedov, who is renowned for his grappling, as an opponent capable of providing the high viewing figures their vast investment demands.

DAZN considers GGG “premium” but claims guys like Jacobs & Kovalev weren’t (I strongly disagree, especially given what DAZN paid for them.) DAZN has also not given Canelo a list of those are would be considered “premium” foes. (more)

DAZN will have been well aware of the commercial success of the discipline switch from Nurmagomedov victim McGregor, which led to his bout with unbeaten Mayweather grossing 4.4 million pay-per-view buys to become the second most lucrative boxing match ever.

Nurmagomedov is indisputably the hottest active fighter in the UFC and was put forward alongside veteran MMA star Jorge Masvidal and Oscar de la Hoya, according to Dan Rafael.

De La Hoya, at least, is a former boxer, although his proposal as an opponent is just as bizarre given that he is 47 and Canelo’s promoter.

The leading boxing journalist had to assure readers that he was “not joking” as he reported that Nurmagomedov, who has no background in boxing, had been put forward before Canelo compiled the 24-page lawsuit.

DAZN, to me, seems to be having simply a bad case of buyers remorse but nobody stuck a gun to anyone’s head and made them offer Canelo $35M per fight. It’s no different than a baseball owner signing a huge $ free agent and regretting it later. Still have to pay up. (more)

Canelo is willing to fight Smith and Saunders as well as the 3rd GGG fight, but that’s a heavy lift with no gate when the first fight did $27M in tickets and the second did $24M. Who’s making that up? This will be messy.

“I’m the pound-for-pound number one in the world,” Alvarez told The Athletic, insisting that he was “not scared of any opponent in the ring” amid rumors that he had been unwilling to accept a trilogy fight against Kazakh powerhouse Gennady Golovkin.

“I’m not going to let failures of my broadcaster or promoters keep me out of the ring. I filed the lawsuit so I can get back to boxing and give my fans the show they deserve.”

Canelo drew with Golovkin in September 2017 before beating him by decision a year later, and he had been lined up to face the unbeaten Billy Joe Saunders before his anticipated scrap with the controversial British southpaw was scuppered by the coronavirus pandemic.

“DAZN would consider Masvidal and Khabib premium foes”What the hell is DAZN doing?It’s clear that they shouldn’t be involved in boxing

3 of the 4 named “Premium” Opponents do not have active boxing licenses and even with a fight this large it will be hard for the state AC to ignore this and approve these fights. DAZN will basically be arguing they can demand Canelo fight Santa.

Despite Canelo’s star quality and huge following in his homeland, names such as Saunders and Callum Smith, the Londoner’s compatriot who also has a flawless record, are unlikely to attract anywhere near the viewing figures of the likes of Golovkin or unlikely suggestion Nurmagomedov.

Russian former light heavyweight champion Sergey Kovalev, who Canelo knocked out in his last fight in November, and Danny Jacobs, the two-weight ex-middleweight title holder he earned a decision over six months earlier, had not been considered “premium”, according to Rafael.

“I strongly disagree, especially given what DAZN paid for them,” he added.

@ufc has fans, but all the fighters want more prize money. Boxing has better prize money – I.e. Conor v. Mayweather made this a problem. Boxing made the richest mma fighter. The irony is palatable.

Is this the big problem with dazn… Surely boxing fans have zero interest in canelo vs de la hoya, khabib or masvidal. That sounds ridiculous. I’m hoping canelo gets out of this deal and gets shown on a platform like espn or fox

“DAZN approved Smith and Saunders for Canelo but not as ‘premium’ guys and wanted to dramatically cut the license fee [for those fights].

“It seems unfair and unrealistic to give the guy only one bona fide choice to fight in Golovkin, when the contract doesn’t specify that, according to the suit. To not consider Jacobs, Kovalev or Smith ‘premium’ opponents is not legit, to me.”

Nurmagomedov is currently preparing to return to the Octagon after more than 13 months out with a title defense against Justin Gaethje on October 24.