Mixed martial arts sensation Muhammad Mokaev has implored Amir Khan to not give up his day job after he easily submitted the 2004 Olympic medalist when the two combat sports stars met on the mat in recently released footage. 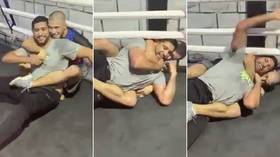 Khan, the former unified light-welterweight champion of the world, couldn’t rely on any of the skills he has acquired in the ring when he tangled with undefeated MMA prospect (and Dagestan-born) Mokaev when he visited Khan’s gym in Bolton, England.

The footage shows Khan attempting to fight Mokaev off his back, with the 2-0 MMA sensation using his legs to secure his position as he looked for a choke.

After a few seconds of struggling, Khan ultimately decided to concede defeat an tap out on the canvas. The boxer was clearly enjoying himself in his brief MMA apprenticeship, as the footage shows him smiling from ear to ear as he gets back to his feet.

The 2-0 Mokaev is considered to be among the brightest prospects in all of mixed martial arts. He has ascended into the professional ranks on the back of an outstanding 25-0 undefeated record in the amateurs, and has previously told RT Sport that he wants to become the youngest champion in UFC history.

It is most likely fair to say that Mokaev will meet a little more resistance in the cage than he received from Khan when he fights as a pro for the third time on October 1 against also-undefeated Jamie Kelly at Brave CF 43 in Bahrain.

Khan, meanwhile, has been linked to a bout with fellow Brit Kell Brook in what would be the third of a three-fight deal Khan signed with Matchroom Boxing’s Eddie Hearn in 2018.