Roman Abramovich could be poised for a big summer of spending after his Chelsea team secured Champions League qualification on a breathless and long-delayed final day of the 2019-20 Premier League campaign. 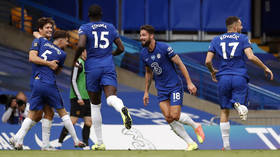 A brace late in first-half stoppage time from Mason Mount and Oliver Giroud sealed a crucial three points for the West Londoners against Wolves to ensure that they finish in the top four on what was the latest-ever final day to an English top flight season.

The win, coupled with Manchester United toppling Leicester 2-0 at the King Power Stadium, ensures that it will be Lampard’s Chelsea and Ole Gunnar Solksjaer’s United who take the final two positions in England’s Champions League allocation. Leicester must try again next season.

For Chelsea though, assuring themselves of Champions League games next season provides a solid bedrock for owner Abramovich to continue his Chelsea rebuild after recently showing renewed desire to open his check book to address the chasm which exists between Lampard’s team and the league’s two dominant teams, Liverpool and Manchester City.

German marksman Timo Werner (who was present inside Stamford Bridge on Sunday) has already been added to Chelsea’s ranks at great cost, while the creative Hakim Ziyech was also prized away from an Ajax team who have enjoyed so much success on the European stage in recent years. Kai Havertz, one of the top talents on the world stage, is expected to join the next month.

The total costs of those three players will be somewhere north of $150 million, but the financial windfall of qualification for Europe’s top club competition should generate enough wiggle room to fund further purchases – and both Lampard and Abramovich will be well aware of the specific holes which need to be plugged at Stamford Bridge.

Chelsea’s leaky defence certainly isn’t being helped by the error-prone Spaniard Kepa Arrizabalaga in goal, nor by a backline which appears to lack the sturdy presence of a Virgil van Dijk or Matthijs de Ligt. Left-back is also an issue.

However, Abramovich’s redoubled commitment to fund aggressive moves in the transfer market suggests that the Russian is keen to set a course to return to Champions League glory.

As noted, Chelsea were joined in the qualification positions by Manchester United after Bruno Fernandes converted the team’s 14th penalty of the season which, along with a late Jesse Lingard goal, ensured they finished in third position. Leicester suffered final day disappointment after holding down their position in the top four for the majority of the season.

14 – Manchester United’s penalty at Leicester is their 14th Premier League spot-kick of the season, the most one side has ever won in a single campaign in the competition. Typical. pic.twitter.com/3yAuD9xHVp

Champions Liverpool didn’t display any hangover from their midweek title celebrations as they came from a goal down to beat Newcastle 3-1 at St. James’ Park, while second-placed Manchester City routed already-relegated Norwich 5-0 in a game which saw Kevin de Bruyne score twice and register a record-equaling 20th assist of a stellar season.

Players who have registered 20 assists in a Premier League season:Thierry Henry Kevin De BruyneThat’s it. That’s the list. pic.twitter.com/FXpuuxP1j1

Bournemouth and Watford will also drop a division after their relegations from the Premier League were confirmed on the final day, while Tottenham will join Leicester in the Europa League after Jose Mourinho’s team’s draw away to Crystal Palace was enough to ensure they finished ahead of Wolves on goal difference.