Five players from MLB’s Philadelphia Phillies, as well as three staff members, have tested positive for COVID-19 amid a battery of tests at the team’s training base in Clearwater, Florida. 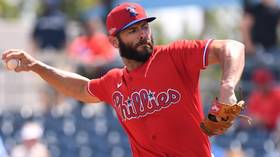 None of the players or staff – who haven’t been named – are understood to have required hospital treatment, though reports suggest that team officials are concerned about the extent of the outbreak given that several test results remain outstanding.

“The first confirmed case occurred this past Tuesday, June 16,” the team said in a statement Friday.

“In addition, 8 staff members have tested negative for the virus, while 12 staff members and 20 players (both major league and minor league players) living in the Clearwater area are in the process of being tested and are awaiting the results of those tests.”

The timing of the outbreak is particularly difficult given that Major League Baseball and its Players Association are attempting to solve a financial dispute ahead of the start of a shortened season in July.

“The Phillies are committed to the health and welfare of our players, coaches and staff as our highest priority, and as a result of these confirmed tests, all facilities in Clearwater have been closed indefinitely to all players, coaches and staff and will remain closed until medical authorities are confident that the virus is under control and our facilities are disinfected,” the team’s managing partner John Middleton added in the statement.

The outbreak among Phillies players is the first to have been announced to the media, while MLB and the players’ union have both agreed that the safety of players is paramount when it comes to plans to take to the field.

The team closed their Florida training base in mid-March as the extent of the COVID-19 pandemic became clear.

The facility was deep-cleaned, with several players returning to train in recent weeks under strict guidelines regarding the numbers of players who could train alongside each other.

Nonetheless, an outbreak of the potentially deadly virus – which has killed more than 120,000 people in the United States – was noted in the team’s training camp in Florida, in which cases of the virus have roughly tripled in recent weeks.