Former Moscow anti-doping laboratory head Grigory Rodchenkov has called for a blanket ban on Russia from next year’s Tokyo Olympics as the doctor re-emerged to speak to the Western media ahead of the publication of a new book. 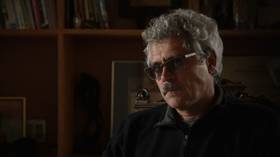 The fugitive doctor fled Russia six years ago before leveling accusations against former colleagues and claiming he had covered up a state-sponsored doping scheme which helped Russian athletes to win medals for a period including the home Winter Olympic Games in Sochi in 2014.

READ MORE: ‘None of it is true’: Russian biathletes sue Rodchenkov for libel over years-long doping scandal

Rodchenkov’s allegations and calls for Russia to be disqualified from major sporting events have appeared on a regular basis before Olympic events, and he was among the most ardent supporters of holding the 2016 Summer Olympics in Rio without Russian participation.

Two years later his campaign against Russian competitors was reactivated on the verge of the 2018 Winter Olympics in South Korea.

His re-emergence in a new interview with the BBC – where he appeared from his hiding place in the US with his face fully covered – this time around seems to be a well-calculated step to promote his new book, ‘The Rodchenkov Affair: How I Brought Down Russia’s Secret Doping Empire’, set to be released this week.

Along with repeating his state-sponsored doping accusations against Russia, Rodchenkov has gone further by making the claim that the Soviet Union boycotted the 1984 Summer Games in Los Angeles not just for political reasons – as is widely held – but actually for doping purposes.

“The Soviets had been planning to hide a doping control laboratory on board a ship in the port of Los Angeles during the 1984 Olympic Games, after Manfred Donike (a senior IOC anti-doping official) and Don Catlin of UCLA’s Olympic Analytical Laboratory announced they would be able to detect all steroids – including stanozolol and testosterone.

“When Los Angeles wouldn’t allow our ship to enter the harbor, that was the last straw. The Politburo pulled the plug and boycotted the Olympics entirely,” he claimed.

Svishev said that the former doctor has been suffering from mental disorders and needs treatment.

“His diagnosis was revealed long ago, we are all aware of his mental disorders. Depending on the season he has acute conditions mixed with calm periods. I think he is writing his books during disease recurrences which feed his fantasy.

“I won’t be surprised if soon there will be cosmic or fantasy fiction scenarios brought by him. We should not treat his ‘creativity’ seriously. We should feel sympathy towards the sick man,” he said.

Despite not bringing irrefutable evidence of the alleged state-sponsored doping system in Russia, Rodchenkov’s words triggered a massive crackdown against Russian sport which resulted in numerous sanctions and restrictions, including an Olympic ban during the 2018 Winter Games where Russian participants competed under a neutral flag.

Further investigation of supposed evidence against Russian athletes has shown that it is often not as reliable as had been initially believed. Two years ago, the Court of Arbitration for Sport overturned the Olympic bans imposed on dozens of Russian athletes and admitted that the former Moscow Laboratory chief’s evidence was “hearsay with limited probative value.”

“The Panel considers it significant that Dr. Rodchenkov admitted in his oral testimony that he had never observed any athlete on the Duchess List

“This evidence is hearsay and as such its probative value is very limited,” the court said.

Last spring, a new scandal involving Rodchenkov emerged after the International Olympic Committee (IOC) confirmed that documents used in a doping case against Russian athletes had not been personally signed by the doctor-turned-whistleblower.

Despite questions over the materials presented by Rodchenkov, he continues to accuse Russian athletes of doping violations, urging international officials to punish the entire nation’s athletic community and effectively accusing them of complicity merely for being Russian.