UFC analyst Dan Hardy couldn’t contain his anger at referee Herb Dean during Saturday’s event on Fight Island after the official hesitated in calling off a fight despite Jai Herbert appearing to be out cold on the canvas. 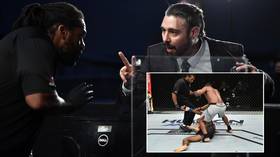 Hardy took umbrage with the officiating after Brazil’s Francisco Trinaldo landed an overhand left to the former Cage Warriors champion, sending him sprawling backwards. England’s Herbert adopted a defensive posture on the ground but the advancing Trinaldo appeared hesitant to strike his clearly dazed opponent.

Dean though, one of the UFC’s most experienced referees, opted to allow the fight to continue and forced the concerned Trinaldo to land several further blows to the near-defenceless Herbert before Dean finally called off the fight.

However, Hardy – who was calling the fight for the UFC – was clearly unhappy with Dean and shouted “stop the fight!” to the referee while the bout was still technically underway before the referee mercifully called it to a halt.

Speaking over a replay of the incident, Hardy said: “He does not want anymore shots in that moment. That fight was over. That’s terrible.“

This was Dan Hardy and Paul Felder’s reaction to Herb Dean’s late stoppage in the Jai Herbert fight 😤 #UFCFightIsland3pic.twitter.com/hroROGnNDS

“I’m gonna give a lot of credit to Trinaldo in that moment right there,” the ‘Irish Dragon’ said. “He could’ve just started teeing off, but he saw what we saw, and that fight should’ve been stopped.

“That p*sses me off. You know, that’s not normally Herb. Herb is usually a fine referee, but tonight that’s two calls now where I think the fight should’ve been stopped. That’s even worse.

“Herbert had a beautiful performance. He’s a young guy making his debut, and Trinaldo rocks him. He falls back the way he falls back like a board. He was out.”

The incident didn’t stop there. Still clearly upset, Hardy left his broadcast position to confront the referee for his failure to stop the fight, with part of the exchange picked up by his microphone.

“…That’s my job. Now you do yours,” Hardy was heard saying to Dean.

The defeat – and accompanying controversy – will be disappointing for Herbert who had looked to be on course for a debut UFC win against the experienced Trinaldo before he was caught by the ‘Hail Mary’ left hand.