Robert Lewandowski scored twice for champions Bayern Munich to take his Bundesliga total to 33 this season, but Erling Haaland scored again for runners-up Borussia Dortmund to average scoring a minute more quickly than the Pole. 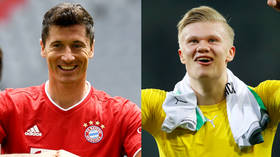 Robert Lewandowski scored twice in 14 minutes to break the record for the most goals by a non-German player in a season in the Bundesliga, although he remains seven shot of Gerd Muller’s all-time record as Erling Haaland provided more evidence of the rivalry the Poland striker is likely to face next season.

The formidable hitman nodded a close-range rebound into the net to put Bayern 2-0 up in their final home match of the season in the 24th minute against Freiburg, then reached a left-wing Lucas Hernandez cross first to restore his side’s two-goal lead.

The result gave Bayern a 12th consecutive win, took Lewandowski beyond Arsenal forward Pierre-Emerick Aubameyang’s previous record of 32 and ensured he has been involved in more league goals in any other player in the major leagues this season – a haul that Lionel Messi and Cristiano Ronaldo will try to overtake with La Liga and Serie A around a month behind the Bundesliga.

Lucas Holer’s reply made the scoreline respectable for the eighth-placed visitors on a day when Lewandowski’s influence in the first half, creating three more chances than the entire Freiburg side, proved decisive.

Dortmund extinguished third-placed Leipzig’s hopes of making up the three-point gap between the two clubs by winning 2-0 at the Red Bull Arena thanks to goals by Haaland in either half.

Both efforts had the hallmarks of Lewandowski’s penalty area nous about them as the Norway prodigy pounced at the far post after half an hour and repeated the trick seconds before full-time.

The 19-year-old has now scored 11 times since arriving at Dortmund in January and has edged ahead of the Bayern top scorer in the average number of minutes he has required to score a goal.

Lewandowski has averaged 81 minutes, while Haaland has netted a minute sooner.