Lewis Hamilton has stormed to pole position in qualifying for the Formula One Russian Grand Prix on Sunday and could be set to equal former champion Michael Schumacher’s wins record – although he faces a subsequent investigation. 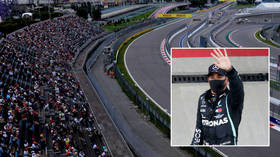 In a dramatic qualifying session, the least contentious development was Hamilton’s outstanding lap to secure pole, beating Red Bull Racing’s Max Verstappen and Mercedes teammate Valtteri Bottas by well over half a second.

The reigning champion was then one of several drivers to be placed under investigation for an alleged failure to follow the race director’s instruction in Q1, in which he was in ample company by having a lap deleted for failing to go through the bollards at turn two.

Hamilton now faces a nervous wait to discover his punishment, which is likely to be a fine and a warning but could be as severe as the deletion of a lap from his second run, which would leave him last on the grid.

THAT. WAS. TENSE! A new track record and it’s POLE for @LewisHamilton at the #RussianGP!! YES! 🙌 pic.twitter.com/HDRJfI8RGR

Fans were allowed to watch the sessions as organizers prepare to welcome a potential crowd of 30,000 to see Hamilton attempt to match seven-time World Champion Schumacher’s record of 91 Grand Prix win.

Victory would give Hamilton his seventh win of an already-dominant season that has left his rivals trailing, none of whom have recorded more than one win.

His chances could be affected by an enforced switch to soft tyres caused by a red flag after Ferrari’s Sebastian Vettel crashed into a wall.

Engineer Peter Bonnington urged Hamilton to cross the line before the lap was ended, and he did so in fourth place at the time before blitzing the field when the action resumed.

“I am starting on the soft tyre, which is not good,” admitted the Briton.

Turn 2 is proving troublesome for some Several drivers have had lap times deleted for crossing the white line#RussianGP 🇷🇺 #F1pic.twitter.com/MFsTsVSawM

Seb clears up his own front wing 🥺#RussianGP 🇷🇺 #F1pic.twitter.com/XkfRIDYYqT

“It’s nice being on pole but here is probably the worst place to be.

“The cars behind me are starting on the medium [tyres]and that is definitely the better tyre.

“It was one of the worst qualifying sessions – it was horrible, heart-in-the-mouth. I got the time taken away, then the red flag came out.

“I have say a big ‘hi’ to all the fans that are here. We’ve missed the fans all year. I hope everyone’s staying safe.”

Hamilton won the race in Sochi last year. His latest pole is his 96th of his career.