Multiple-time Formula 1 world champion Lewis Hamilton has apologized after sharing an image on Instagram which appeared to endorse a conspiracy theory suggesting Microsoft co-founder Bill Gates is “lying” about a Covid-19 vaccine. 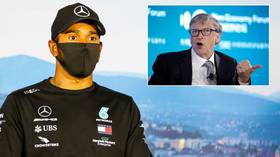 In the since-deleted Instagram Story, Hamilton, 35, shared a video by internet personality Andrew Bachelor of Gates talking about a potential coronavirus vaccine in which he plays down suggestions from the underbelly of the web that a Covid-19 vaccine will contain so-called ‘tracking chips’, which detractors say will allow various governments to spy on those who take it if and when any vaccine is developed.

“No, there’s no connection between any of these vaccines and any tracking type thing at all, I don’t know where that came from,” Gates says in the interview with CBSN.

“Dr. Fauci and I are the two most mentioned, and some of these are deeply ironic. Like, our foundation is about reducing death and bringing equity to health.

“And yet the idea that we get accused of creating chips or the virus, I think we just need to get the truth out there.

“We need to explain our values so that people understand why we’re involved in this work and why we’re willing to put billions towards accelerating the progress. It’s a little unclear to me, but I hope it will die down as people get the facts.”

However, Hamilton’s critics pointed out that he posted the video accompanied by commentary from Bachelor in which he states: “I remember when I told my first lie”, which some people took to mean Hamilton was issuing a warning about any potential vaccine to his 18.3 million Instagram followers.

This comes amid a growing subculture in various countries, and particularly in the United States, which states that all vaccines are in fact damaging to people’s health – and that a Covid-19 vaccine would be no different.

@LewisHamilton I am a huge fan. I can forgive you for the Vegan nonsense. But being Anti-vax is just foolishness. You got too much money to be this dumb. Educate yourself. @MercedesAMGF1

Lewis Hamilton posting antivax shit is another reminder why you should never put celebrities on a pedestal.Fame and success in one field doesn’t mean anything about someone as a person. It’s sad to see someone I deeply admire abuse their platform like this.

in conclusion lewis hamilton is a legend and we should have never doubted him pic.twitter.com/aSICI3TAgC

Hamilton – who received praise for his support of the ‘Black Lives Matter’ movement – further clarified his stance with a subsequent post on Instagram.

“Hi guys. I’ve noticed some comments on my earlier post around the coronavirus vaccine, and want to clarify my thoughts on it, as I understand why they might have been misinterpreted,” he wrote.

“Firstly, I hadn’t actually seen the comment attached so that is totally my fault and I have a lot of respect for the charity work Bill Gates does. I also want to be clear that I’m not against a vaccine and no doubt it will be important in the fight against coronavirus, and I’m hopeful for its development to help save lives.

“However after watching the video, I felt it showed that there is still a lot of uncertainty about the side effects most importantly and how it is going to be funded. I may not always get my posting right, I’m only human but I’m learning as we go. Sending you positivity.”

The world’s number one tennis player Novak Djokovic has previously outlined his opposition to vaccines, suggesting that he would pull out of ATP events if mandatory vaccinations were advised, while other athletes in various sports have also outlined their anti-vaccination stance in recent months.

Share. Twitter Facebook Google+ Pinterest LinkedIn Tumblr Email
Previous ArticleKatie Price getting ‘his and hers’ TEETH with Carl Woods in Turkey after being forced to leave Harvey at home
Next Article Lawyers For Huawei’s Meng Demand Release Of Canadian Spy Docs