Inter Milan coach Antonio Conte has dismissed talk that the club could swoop for Barcelona star Lionel Messi, labelling the speculation “fantasy football” but admitting “there isn’t a madman in the world who wouldn’t want Messi.” 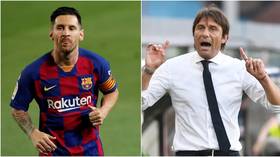 Speculation has mounted in recent days that Inter and their Chinese majority shareholders the Suning Holdings Group are lining up an ambitious plan to lure Messi to the San Siro next summer.

The talk has further been fueled by reports that Messi’s father and agent, Jorge, is relocating his business interests to Milan to take advantage of more favorable tax conditions.

But speaking after Inter’s 3-0 win at Genoa on Saturday, which lifted them back up to second in the table, one point ahead of Atalanta, Conte poured cold water the chances of the Argentine magician moving to Italy.

“We’re talking about fantasy football, situations that at the moment cannot be linked to Inter. For many reasons,” the Italian said, Goal reported.

“I don’t think there’s a madman in the world who wouldn’t want Messi. But that kind of situation really is very, very, very far from Inter, from what we are doing and what we are trying to build.

“We need to create a solid base, and then maybe… I repeat, this is fantasy football. However, I like the fact that when fantasy football is involved, the team that is linked to it is always Inter.”

Antonio Conte: “The rumours about Leo Messi to Inter are absolutely fake. Don’t trust these fake news. He is not joining Inter, not even in fantasy football”. 🇦🇷🔵 #Inter#Barcelona#transfers

Messi has endured a difficult season at Barcelona, losing out to Real Madrid in the La Liga title race and being involved in a series of public spats with members of the hierarchy.

Barcelona bosses have also been forced to deny embarrassing accusations that they launched a social media campaign aimed at undermining the reputation of influential figures linked to the club, including Messi.

On the pitch, the 33-year-old Ballon d’Or holder has criticized the team’s performances under new manager Quique Setien, branding them “weak and erratic.”

Messi is under contract at the Catalan giants until next summer, and has yet to open talks on potentially prolonging that deal.

Despite the disappointment of their domestic campaign, Messi still finished as La Liga top scorer with 25 goals, also registering a record 22 assists.

Messi and Barca will look to salvage their season by winning the Champions League when the competition gets back underway in August.

They host Italians Napoli in the last-16 second leg at the Nou Camp with the tie finely poised at 1-1.