FIFA has responded to a threat to boycott US football matches by President Donald Trump, urging the world to “say no to racism and violence” after the latest row over athletes who take a knee during the American national anthem. 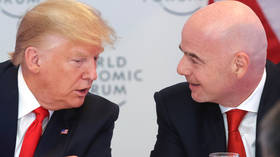 Trump tweeted that he would stop following US soccer after learning that a policy requiring players to stand during the national anthem had been dropped, insisting: “I won’t be watching anymore!”

He then renewed his persistent criticism of high-profile stars who make the symbolic move in support of the Black Lives Matter movement, retweeting a claim by Florida Republican Matt Gaetz that the country would be better off without a team than one refusing to stand for the anthem.

“FIFA strongly advocates for tolerance, mutual respect and common sense when such important matters are debated,” the governing body told AP in response to the remarks.

“FIFA has a zero-tolerance approach to incidents of all forms of discrimination in football, as outlined in the FIFA Statutes. We must all say no to racism and no to violence.”

The US Soccer Federation adopted the rule in 2017 after US captain Megan Rapinoe, who was the subject of furious tweets from Trump after she said she would not be “going to the f*cking White House” last year, took a knee in support of Colin Kaepernick, the NFL player who initiated the form of silent protest in 2016.

Football bosses in America annulled the rule last week in response to widespread unrest across the country that sparked global anti-racism protests against the death of George Floyd.

FIFA president Gianni Infantino has given his backing to the anti-racism gestures made on the pitch by a variety of high-profile footballers since the protests over Floyd’s killing at the hands of police officers began.

Infantino showed Trump a red card when he met the leader at the White House after the 2018 World Cup in Russia, only for Trump to mimic throwing the card across the room after he was advised it could be used “when you want to kick someone out.”

“You are part of the FIFA team,” Infantino told the president while presenting him with a shirt, to which Trump replied: “That’s good.”