NASCAR truck racing veteran Ray Ciccarelli says he and his family have been “attacked and abused on social media” since he threatened to quit the sport after its ban on the Confederate flag. 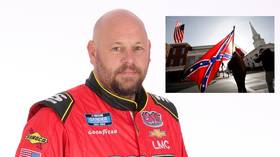 The 50-year-old racer took to Facebook last week to vent his unhappiness over NASCAR’s recent decision to ban the Confederate flag, labeling the move “political BS.”

“Well, it’s been a fun ride and dream come true but if this is the direction NASCAR is headed we will not participate after 2020 season is over,” Ciccarelli wrote.

“I don’t believe in kneeling during the anthem nor taking people’s right to fly whatever flag they love.”

The veteran racer added that he would sell off his CMI Motorsports team and walk away from NASCAR over the ban.

“All you are doing is f*cking one group to cater to another and I ain’t spend the money we are to participate in any political BS!” he ranted. “So everything is for SALE!!”

But after facing a backlash over the comments, Ciccarelli has now gone into reverse, claiming his views were misconstrued and that his family have been unjustly subjected to a barrage of abuse.

“I wasn’t raised the way people are portraying me to be. That’s just not me,” Ciccarelli told TobyChristie.com.

“I am not that type of person. Just the attack – my wife, my family have been attacked and abused on social media. It’s just heartbreaking.”

Ciccarelli has since deactivated his Facebook page, but said he understood “both sides’ attitude toward the Confederate flag.”

“Everything I was saying was the fact that I understand both sides’ feelings toward the flag. My viewpoint, all I was trying to say is how do you take (the flag) from one group and help support the group that it offends and then what do you do to the group that you took it from? Now, they get outraged.”

Further attempting to quell the attacks on him, Ciccarelli said everyone had the right to an opinion and could “kneel and protest and do what they love and support and all that.”

Regarding the question as to whether he would follow through on his decision to quit the sport, he added that he was still undecided.

Earlier in June, NASCAR moved to ban all displays of the Confederate flag in the wake of the Black Lives Matter protests which have swept the US and beyond.

“The presence of the confederate flag at NASCAR events runs contrary to our commitment to providing a welcoming and inclusive environment for all fans, our competitors and our industry,” the organization said in a statement.