Former Formula One ace Adrian Sutil has reportedly been involved in a car accident in Monaco, crashing a luxury McLaren Senna LM supercar estimated to be worth $1.175 million. 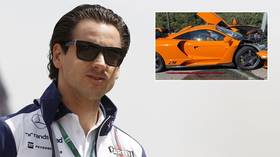 Full details of the accident are yet to emerge and it remains unknown how the collision occurred on the streets of Monaco.

Despite severe damage to the car, the driver – purported to be Sutil – walked away unscathed.

Pictures from the scene of the crash, which were widely shared on social media, supposedly showed the German driver calmly sitting next to his destroyed vehicle.

The orange car from the limited McLaren series will need serious repair as its front end was completely wrecked in the crash.

The car, which boasts around 800 horsepower, was based on the Senna GTR track car with modifications appropriate for highways and city streets.

It was named after legendary driver Ayrton Senna from Brazil, who tragically died in a racing accident during a Formula One Grand Prix stage in 1994.