Brazilian freestyle football star Natalia Guitler showed off her impressive chest power by propelling the ball 15 feet up in the air and onto a balcony in a display of skill that has delighted her social media following. 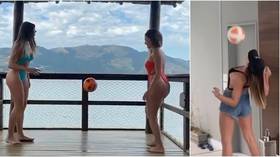 Hailed as the queen of the footvolley scene, the 33-year-old Guitler is something of a cult figure in her homeland, enjoying kickarounds with the likes of Neymar and Ronaldinho while regularly showing off her full array of tricks and flicks to her Instagram following of 1.4 million.

In the latest of those, Guitler demonstrated her impressive chest abilities, sending the ball back upwards towards a friend who had dropped it from an indoor balcony from a height of around 15 feet.

“Tag a friend who needs to improve their chest,” wrote the Brazilian skillster in the caption.

Although the ball was likely a beach version with some added buoyancy, Guitler’s online army were nonetheless impressed.

Among the replies was a series of clapping emojis from Fluminense midfielder Lucas Felipe Calegari.

Guitler – who has multiple world footvolley titles to her name – recently treated fans to a series of bikini keep-up sessions with fellow freestyle footballer-turned-model Ana Heckert.

In one, the pair juggled the ball across a pool with the idyllic backdrop of the sea to embellish the scene.

Such is Guitler’s renown that she has previously played games of TeqBall with Neymar at the Paris Saint-Germain ace’s holiday home in Bahia.

She’s also earned high praise from the likes of Ronaldinho – himself widely regarded as one of the most skillful players ever to have a ball at his feet.

“They respect me a lot and respect my job. Especially for a woman, that’s really cool. They admire me for being a woman who’s so good,” Guitler has previously said.

Guitler’s chosen sport of footvolley has ambitions to increase the number of professional players and is also eyeing a potential shot at Olympic entry in the future.

Share. Twitter Facebook Google+ Pinterest LinkedIn Tumblr Email
Previous ArticlePM says ‘people should make up own minds’ on Dominic Cummings – as it happened
Next Article Bankrupt Hertz Is Selling Rental Cars For Cheap: Here’s Where You Can Find Them