Marseille coach Andre Villas-Boas stepped in front of the microphones to defend his player following accusations of racism leveled at Alvaro Gonzalez by PSG star Neymar after their angry confrontation on Sunday. 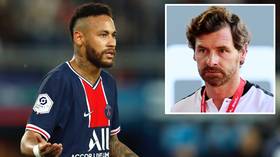 Marseille defeated PSG 1-0 in a match that saw tempers flare in stoppage time as five players were sent off for their involvement in a brawl.

Neymar was one of the players dismissed, and after the match the Brazilian star directly accused Marseille center-half Gonzalez of racist slurs during the incident.

But, after talking to his player and assessing the incident, Marseille boss Villas-Boas said that he, and the club, will back Gonzalez against Neymar’s accusations.

“We are alongside our player, in the search for the truth,” Villas-Boas told reporters on Tuesday.

“We are sure that Alvaro is not racist. Olympique de Marseille represents multiculturality.”

Villas-Boas also hinted that Neymar himself knows what it feels like to be falsely accused, as he made  a thinly-veiled reference to the Brazilian being accused of rape in a case that was eventually dismissed with the accusers charged with perverting the course of justice.

“He suffered, too,” said Villas-Boas.

“He knows precisely the impact of false accusations.

“It’s not correct towards Alvaro. It’s a sensitive subject. Marseille and PSG are here to help find the truth.”

Gonzalez’s teammate Valentin Rongier also spoke up for his colleague, saying, “I heard absolutely nothing. He is always smiling and respectful, even if he likes to make fun of others. Maybe he managed to make Neymar go berserk.”

Neymar struck Alvaro on the back of the head during the game and later tweeted saying he regretted not hitting the Spaniard in the face.

The Brazilian admitted on Instagram that it was a mistake to attack Alvaro but defended his own stance against racism.