Neymar paid tribute to Brazil legend Ronaldo on Tuesday after he scored a hat-trick against Peru to overtake him in the country’s goalscoring charts. 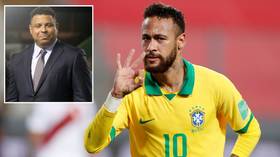 The Paris Saint-Germain star fired the Selecao to a 4-2 victory in their FIFA World Cup 2022 qualifier in Lima, and his three goals saw him move to 64 goals for his country, two beyond Ronaldo’s total.

He paid tribute to Ronaldo on Instagram after the match with a photo of the former Barcelona, Real Madrid and Inter Milan legend alongside the caption: “All my respect for you PHENOMENON.”

Rivaldo, who was a teammate of Ronaldo’s when Brazil won the 2002 World Cup – and reached the final four years earlier – applauded the tribute.

Neymar also honored the 44-year-old with his celebrations on the pitch in Tuesday’s win.

Neymar hit the R9 celebration as he overtook him as Brazil’s 2nd highest goalscorer ☝️ pic.twitter.com/ToU8m65PJl

Neymar’s goal celebration with the #9 to honor Fenômeno since passing his top score for Brazil. What a great person! 🤩 pic.twitter.com/2WbQLHrIE9

Asked about his tributes after the game, he said: “I did it to honor Ronaldo, because I tied with him as second overall leading scorer and wanted to honor him somehow, because he’s an idol for all of us Brazilians and especially me. It was a humble homage.”

🗣 “I did it to honour Ronaldo” 🇧🇷Neymar reacts to matching Ronaldo’s goalscoring record for Brazil pic.twitter.com/4S0rdDRRN6

Brazil went behind early in Peru to Andre Carrillo’s sixth-minute opener, but Neymar slotted home a penalty midway through the first half to ensure the two sides went in level at halftime.

Renato Tapia fired Peru back in front just before the hour-mark, but five minutes later Richarlison equalised for Brazil.

Neymar dispatched a second penalty in the 83rd minute and – after the hosts had been reduced to nine men late on as Carlos Caceda and Carlos Zambrano saw red – he had his third deep into injury time with a simple rebound off the post.

“Neymar is at the level of Messi and Ronaldo. It’s a universal fact,” one wrote, while another added: “Love him or hate him he’s been the best player of our generation not named Ronaldo or Messi.”

Neymar is going to destroy R9 & Pele’s goals record for Brazil. Love him or hate him he’s been the best player of our generation not named Ronaldo or Messi

He is now second only to Pele in the Selecao’s all-time scoring charts. Pele notched 77 goals for Brazil in just 92 appearances.

Given Neymar is only 28, he has a good chance of taking that record before the end of his career.