Arsenal supporters are breathing a sigh of relief today after Gabon international Pierre-Emerick Aubameyang inked a new three-year deal to remain in North London, ending speculation of a move away from the Premier League. 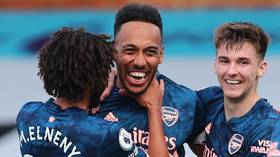 The 31-year-old’s current deal was set to expire at the end of this season, with a number of top European clubs understood to have been circling for the player who has emerged as one of English football’s most dependable goalscoring threats since he joined Arsenal from Bundesliga side Borussia Dortmund in 2018.

Any potential suitors will now be forced to look elsewhere, though, after Arsenal confirmed that their skipper had signed a bumper new deal to remain with the club for the next three years.

Aubameyang scored in Arsenal’s 3-0 win against Fulham on Saturday, with boss Mikel Arteta hinting to the media after the game that talks surrounding a new deal for the club’s talismanic striker was close – with news of the completed deal finally confirmed on Tuesday.

“Signing for this special club was never in doubt,” Aubameyang said upon signing the new contract.

“It’s thanks to our fans, my team-mates, my family and everybody at this club that I feel like I belong here.

“I believe in Arsenal. We can achieve big things together. We have something exciting here and I believe the best is to come for Arsenal.”

Losing Aubameyang, especially for free, at the end of the season would have been a seismic blow to Arteta’s Arsenal rebuild, and the Spanish boss emphasized his captain’s importance to the squad when speaking to the media about the deal.

“It was important for Pierre-Emerick to stay with us,” Arteta said.

“He’s a superb player with an incredible mentality. Being the player to have taken the least amount of time to reach 50 goals with this club tells you everything you need to know about him and his way of working.

“He’s an important leader for the team and a big part of what we’re building. He wants to be up there with the best players in the world and leave his mark. He can achieve that here.”

The Gabonese player has now scored an impressive 55 goals in 86 Premier League games and, with a record every bit as impressive as some of the names that have preceded him in the club’s famous red jersey, Aubameyang says he wants to leave a robust legacy behind him.

“I want to become an Arsenal legend, just like Thierry, Wrighty, Adams and Bergkamp. Too many to mention,” he said.

“My dad is my biggest inspiration and he was captain of his club and his country, so it means so much to me to be the captain of this special club. I want to leave a legacy, this is where I belong. This is my family.”