Boxing legend Roy Jones Jr says he understands the concern of people who fear he could be seriously injured when he steps into the ring with fellow icon Mike Tyson in September. 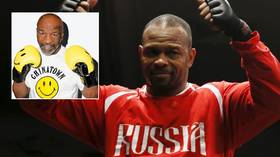 It was announced in recent days that 54-year-old Tyson’s long built-up comeback to the ring is indeed happening and will take the form of an eight-round exhibition fight against the 51-year-old Jones Jr in just a few weeks’ time.

Anticipation for Tyson’s first fight in 15 years hit fever pitch in recent weeks when the former world heavyweight champion posted a series of clips to social media showing him in training, and apparently displaying that very little of his famous power has deserted him in the years he has been absent.

Jones Jr is equally a boxing icon and has been heralded by some as perhaps the finest pure boxing talent to have ever competed in the sport.

However, and despite boxing professionally as recently as two years ago, Jones Jr says he has heard the concerns from some fans as to his safety in the ring with Tyson – who will enjoy a significant weight advantage.

Of course, Jones Jr has competed against bigger men before and has won recognized world titles in four weight classes – including heavyweight – and wants to remind people of just what he can do against larger opponents.

“(Previously) I was beating everybody in every weight class I was in, so what you gonna do?” he said. “It’s like David and Goliath. He’s a giant monster, we know. I’m little David and all I’ve got is God on my side, which is all I’m gonna need.”

“I was always ready and will be ready this time as well. I want all my fans to support me and tune in. It’s gonna be epic.”