Khamzat Chimaev made UFC history by picking up a second victory in the space of 10 days on Fight Island, again dominating in a performance which has further fueled the buzz around a man tipped for MMA stardom. 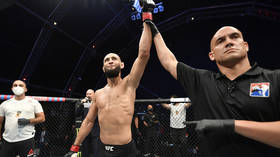 The Chechen-born Chimaev utterly overpowered Northern Ireland’s Rhys McKee in their welterweight bout on the main card on Yas Island, earning a TKO win with a ground-and-pound assault at 3 minutes and 9 seconds of the first round.

Such was Chimaev’s dominance that he landed 68 strikes to McKee’s none.

It earned Chimaev, 26, a $50,000 Performance-of-the-Night bonus, but also a place in the UFC history books for recording the shortest ever period between victories in the modern era of the promotion, coming just 10 days after he defeated UK fighter John Phillips in similarly destructive fashion on Fight Island, on that occasion at middleweight.

“Fighting is fighting. I do sparring every day. This is like sparring for me. History is history, what can I say?” said Chimaev, who fights out of Sweden and now stands 8-0 in his career, having finished each of his opponents.

For many observers, Fight Island has given birth to a very special prospect who has set multiple divisions on notice, and has perhaps inevitably earned Chimaev comparisons with Dagestani destroyer and unbeaten lightweight king Khabib Nurmagomedov.

Wow, who in the world is khamzat Chimaev? This dude right here just smashing dudes. Two of em in a week. Wow

This guys is for real Chimaev is different #UFCFightIsland3

Sweden’s Alexander Gustafsson suffered a first-round defeat on his return to the octagon on Saturday night in a heavyweight contest against Fabricio Werdum, but found the time to hail his teammate Chimaev, with whom he trains at the Alllstars gym in Stockholm, warning that he was “coming for everyone.”

It’s sucks to lose but I’m alive and healthy it’s a sport, a sport that I love! Thanks Werdum for a great fight and the @ufc for the opportunity! Now let’s celebrate my brother and teammate kamza borz!!! He’s coming for everyone, be ready🥇🥇🥇

Others echoed that the growing hype around Chimaev was very real, and that he was already well on course for breakout star of the year.

I know it’s only July but Khamzat Chimaev, for me, is the front runner for prospect / breakthrough star of the year. He’s a problem and I’m here for it. #UFCFightIsland3

Chimaev came to Abu Dhabi, mugged a couple of pro fighters in two weight classes and left waiting for his next assignment.Dude *literally* has just a little sweat on his forehead, that’s it. He is evil and I mean that as the highest compliment.

Australian Robert Whittaker, who earned a decision victory over Britain’s Darren Till in their middleweight main event in Abu Dhabi, gave props to Chimaev, describing him as a “savage” and said he hopes he stays at welterweight.

Speaking to RT Sport ahead of his second Fight Island showdown, Chimaev himself – who is nicknamed ‘Borz’, meaning ‘wolf’ in Chechen – said he was “100%” sure he would be a UFC champion in the space of two years – although he now appears on a potentially faster track than that with such an explosive debut in the promotion.

A star was born on Fight Island and he firmly has the attention of the UFC.

Share. Twitter Facebook Google+ Pinterest LinkedIn Tumblr Email
Previous Article‘It’s my duty to see it through’: Khabib meets Dagestani leaders to discuss late father Abdulmanap’s sporting legacy
Next Article ‘What happened there?!’ UFC fighter Correia gets pummelled after turning back on rival mistakenly thinking round is over (VIDEO)