Defeated UFC middleweight title challenger Paulo Costa has sworn revenge against Israel Adesanya after seeing footage of his rival ‘air-humping’ him in the cage and taunting his coach immediately after his win. 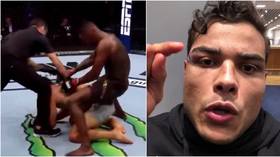 Directly following Adesanya’s second-round TKO win, the ‘Last Stylebender’ initially celebrated with the X-rated gesture towards his opponent, before trading insults with Costa’s coaching team and making a vulgar gesture with his hands.

The incident was apparently missed by Costa at the time but with the smoke now cleared and the Brazilian having the opportunity to review footage from the first defeat of his professional career, it was clear that he was none too happy with his opponent’s antics.

Taking to Instagram on Monday evening, ‘Borrachinha’ swore to exact revenge on Adesanya for what he calls his “disgusting action” after the fight.

Adesanya is human trash. This has become a grave situation ! I saw his disgusting action after fight and I will not stop until I have my revenge. @danawhite make this rematch happen.

“I come here to talk about the action that the human trash did after the fight. I didn’t see when I was there in the cage, but I saw now,” Costa, who is sporting visible damage on his right eyebrow, said in the brief video clip.

“I disapprove, 100 percent. To me this is mortal now. Nobody will can me…

“I want my rematch,” he continued. “And you know, I’m [going to]wait for you, something happened before the fight, I’m not [making]excuse here to my people, my fans, but I will be 100% to fight him and make him may.

Both Adesanya and Costa initially appeared conciliatory in the cage after the fight, with both men exchanging words and a handshake in the moments after the contest.

This also came after an unusually calm exchange between both when they crossed paths in the fighter hotel in Abu Dhabi days out from the fight, although tempers did flare at the final staredown.

However, if the bad blood between the two appeared to have been vanquished in the moments after the fight, that now seems to be in the past following Costa’s furious reaction to Adesanya’s post-fight antics.