Boxing legend Mike Tyson is among those lauding Patrick Mouratoglou’s inaugural tournament, calling it “the UFC of tennis” as it launched on the same weekend as Novak Djokovic’s Adria Tour. Not everyone has been so flattering. 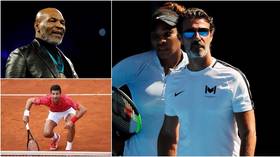 At his academy near the Italian border in the south of France, Patrick Mouratoglou gave his new concept of “tennis like never before” a more low-key launch than the comparatively wild scenes going on in Belgrade over the weekend.

While world number one Novak Djokovic was bouncing at a piano and replacing his fellow stars with ball boys during matches when he wasn’t hugging them, the nearest the Ultimate Tennis Showdown seemed to get to that kind of perma-grinned PR stunt was a warm-up for world number 50 Richard Gasquet with his daughter.

The 11-year-old was one of the few people on the courts to watch a concise new version of tennis, unlike the whooping crowds of 4,000 who crammed in to watch Djokovic and friends playing the established form of the game.

If there was a little of the nextgen feel to the idea – the umbrella term used to describe the generation of younger players dreaming of the day when they might conceivably win Grand Slams regularly in the absence of Djokovic, Rafael Nadal and Roger Federer – then Mouratoglou would likely be pleased with that outcome.

Best known as Serena Williams’ long-serving coach, the man who has held training sessions with teenage American sensation Coco Gauff has created a form of the game for shorter attention spans in which players race against the clock to win the most points during each quarter of a 40-minute match.

Players serve twice alternately, with potentially nail-biting moments accommodated throughout: a point carries on if the clock runs out, a deciding point is played in quarters that are tied and a “sudden death” fifth quarter is played if the score finishes 2-2.

“It’s like the UFC of tennis,” Mouratoglou persuaded Mike Tyson, whose love of a knockout blow has drawn him back into his own individual sport, to tell fans.

That might not be music to the ears of the likes of Nadal, who has been mocked by nextgenner Nick Kyrgios for his occasionally ponderous approach to finally completing a first serve, and Federer, whose tendency to glide around the surface might jar with the non-stop ethos.

There’s also no chance of the epic deciders that can cause traditional matches to extend into mental and tactical battles lasting five sets and several hours – when a fifth quarter is required, it starts at the sharp end of an established tie-break, giving victory to the first player to win two successive points.

Perhaps most pertinently at a time when only a few high-profile exceptions are playing elite tennis in front of crowds, the experience is as digital as the video games some fans have compared it to. With no in-person attendees, fans are encouraged to watch the action online, forensically scrutinizing everything that happens via a bewildering arsenal of screens, cameras and speakers beaming back the action from the court.

With every point counting towards a league table, Stefanos Tsitsipas, the 21-year-old who exchanges jockish jokes with Kyrgios on social media, showed some of the form that took him to last year’s Australian Open semi-finals to hit more than 30 winners in a drubbing of Frenchman Benoit Paire, the world number 22.

Gasquet was drawn into a sudden-death encounter with another regular also-ran at tournaments, Belgian David Goffin, as Tsitsipas and prospect Matteo Berrettini qualified for the semi-finals by finishing in the top two, leaving Goffin and Gasquet among four players destined for the quarter-final play-offs.

Perhaps the clearest indicator of how the format feels to top players will arrive when Dominic Thiem, the world number three who also played in Djokovic’s tournament, joins the fray.

In the meantime, Mouratoglou has claimed he is increasing the emotion in tennis, trying to lower the age of fans and engage new audiences with the fusty old sport in response to research that has shown the average age of tennis crowds is over 60.

Bruh, what is this https://t.co/M35DWEfsNY

Looks a little different. I’m just not on board with new tennis events and sport going on in general with everything that’s going on at the moment.

Kyrgios was baffled as he watched footage of his 20-year-old fellow Australian Alexei Popyrin winning a point without hitting a shot as the time ran out on 21-year-old French opponent Elliot Benchetrit, who is currently ranked number 208.

“Bruh, what is this?” he asked, as the tournament’s Twitter team, who had earlier been apparently mocked by their counterparts from the Adria Tour after announcing a rain delay, cheerfully tried to explain the format to him.

“Looks a little different,” he cautiously replied, receiving an invite from Ultimate Tennis to “get in touch with us if you’re down.”

“I’m just not on board with new tennis events and sport going on in general with everything that’s going on at the moment.”

The bastardisation of tennis. It’s awful.

.You gotta be kidding me.This is no kind of a tennis showdown,far less the Ultimate.This isn’t even Tennis Lite.The only thing tennis-y about it are the net racquets—or will you be changing those, too?@CalebPereira23@MattRacquet@arandomgamer02@coinniss@mzeme@markalannixon

Others agreed, accusing Mouratoglou of the “bastardization of tennis” and “piping in crowd noise like a poorly attended WWE show.”

“You’ve got to be kidding me,” said one. “This is no kind of a tennis showdown, far less the Ultimate. This isn’t even tennis lite. The only thing tennis-y about it are the net and racquets – or will you be changing those, too?”

The opening tournament will continue with matches planned for Saturday and Sunday across five weekends. A total of 50 matches will be played.