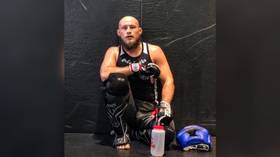 The promotion confirmed middleweight Fakhredtinov’s stance, adding that they had received an exhaustive explanation regarding his motives.

“A fight is fight, you need to be fully focused entering the cage. I’m a fighter. I cannot beat my brothers at full strength, and I don’t want to play the fool in the cage and punch somebody in the face. To be fair I need to perform against any opponent chosen by the league. But I can’t do it due to my religious motives,” the fighter added.

The 28-year-old outlined, however, that he doesn’t plan to retire, adding that he “gave up the belt not to betray his fundamental beliefs.”

Fakhredtinov noted that could return to the cage in the near future if his opponent is not Muslim.