Former top five tennis player Daniela Hantuchova has warned that Novak Djokovic’s US Open exit for injuring a line judge was an example of when his “anger comes out of control”, adding that his timing is “not getting it right”. 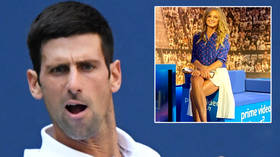 Former Grand Slam semi-finalist Hantuchova watched in horror as Djokovic hit an official by firing a ball at the back of the court during his quarter-final in New York, where he was disqualified by tournament leaders after a lengthy debate with them at the net.

Hot on the heels of a summer in which he has been widely criticized for holding events during the pandemic and forming a breakaway players’ union, Djokovic has faced public disgrace since the fiasco on Sunday.

“It feels like sometimes the anger comes out of control,”  rued Hantuchova, speaking in her role as an analyst on Amazon Prime.

“I care so much about him and respect everything he is doing for our game but I just hope there is a lesson to be learned, even if this one came at the worst possible time.

“Pretty much the only thing standing between him and an 18th Grand Slam title was himself, with all my respect to the other players.”

Djokovic was derided after his Adria Tour events in Serbia and Croatia in June resulted in several players and other professionals testing positive for COVID-19.

The matches were held without the kind of health measures that have been implemented in public spaces in many parts of the world during the pandemic, with Djokovic playing football, visiting a nightclub and embracing his fellow stars and members of the public.

“So many times he has the right intentions,” insisted Hantuchova. “It’s just with the timing he’s not getting it right, like the Adria Tour.

“There’s no problem with running an exhibition tour like that, just not when the whole world stops. Same with the ATP stuff. Sure, things need to change – but not right now.”

Few have argued with the decision to dismiss Djokovic from the tournament, but the tennis great has a surprise supporter in Serbian poet and writer Matija Beckovic.

In an interview with Hello!, the 80-year-old said that the Grand Slam had “disqualified itself more than him with that decision.”

“I don’t believe that in a similar situation they would do it to someone else, and especially not to Roger Federer or Rafael Nadal,” he elaborated. “Novak Djokovic has always been above everyone and above everything, so he will stay that way.

“The Americans will not be able to take that away because of one ball. He went too high to be dragged to the ground.

“Our world does not really understand tennis, nor is it our national sport. But our world saw his matches as squares in which we liked to see ourselves and how we would look when hit one on one in those conflicts.

“I am convinced that our Novak will come out of everything even stronger.”