Los Angeles Rams head coach Sean McVay has gone public with his bemusement at the NFL’s continued plans to go ahead with their season, despite the ongoing coronavirus pandemic. 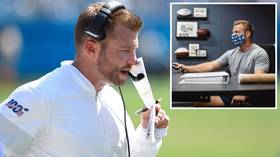 McVay was speaking to the media on a joint conference call with Los Angeles Chargers head coach Anthony Lynn to promote the upcoming season of the behind-the-scenes training camp documentaries, “Hard Knocks,” which will feature both the Rams and the Chargers.

And McVay suggested that going ahead with the NFL season while social distancing rules are still in effect is a near-impossible task.

“Is this crazy, coach Lynn?” he asked his fellow coach.

“We’re talking about some of this stuff and we’re playing football. I mean, we’re going to social distance, but we play football?

“Hey, this is really hard for me to understand all this. I don’t want to be … I don’t get it. I really don’t.”

Back in the building.

McVay returned to the team’s offices for the first time on Thursday, as the team’s official Instagram account featured him at his desk wearing a Rams-branded face mask – a compulsory measure for all people in public after California governor Gavin Newsom introduced the law this week.

And while McVay is unsure about the NFL’s decision to plow forward with their scheduled season, he admitted he’s looking forward to having his team featured as part of the upcoming docuseries.

“We’re really excited about it,” he said.

McVay’s reaction follows on the heels of comments from Dr. Anthony Fauci, director of the National Institute of Allergy and Infectious Diseases, who said that coronavirus complications could mean that the upcoming NFL season could be hugely impacted, or potentially even canceled.

“Unless players are essentially in a bubble – insulated from the community and they are tested nearly every day – it would be very hard to see how football is able to be played this fall,” Fauci told CNN.

“If there is a second wave, which is certainly a possibility and which would be complicated by the predictable flu season, football may not happen this year.”