Khamzat Chimaev is being hailed as a UFC star-in-waiting after making history on Fight Island, but the Russian-born fighter says he is not planning any ostentatious displays of wealth similar to the likes of Conor McGregor. 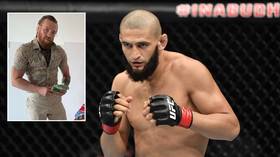 Chimaev overwhelmed Northern Ireland’s Rhys McKee in their welterweight contest in Abu Dhabi on Saturday night, finishing his opponent with a ground-and-pound barrage 3 minutes and 9 seconds into the first round.

The win ensured Chimaev etched his name into the UFC history books by claiming the shortest-ever period between victories in the modern era of the promotion, coming just 10 days after he defeated Britain’s John Phillips in similarly destructive fashion – on that occasion at middleweight.

The 8-0 Chimaev pocketed a $50,000 Performance-of-the-Night bonus for his work against McKee and has firmly earned the attention of the MMA world, being tipped as ‘Khabib 2.0’ – a perhaps inevitable comparison given Chimaev displays a similar oppressive dominance to the UFC lightweight champ, and was born in Chechnya, which neighbors Khabib’s own Dagestani homeland.

Despite the newfound fame and financial boost, the softly-spoken Chimaev said he would not be prone to shows of wealth along the lines of MMA money-man Conor McGregor or his boxing equivalent Floyd Mayweather Jr.

‘I’m not Mayweather or McGregor, I want to help people’: Khamzat Chimaev after his 2nd UFC victory #[email protected]/eKlvp4AUM8

“I do this not only for me, I do this for everybody I can help. I don’t want to be like Mayweather and McGregor, to show my money or something like that. I want to help people,” replied Chimaev when asked on Fight Island about how he would spend his bonus.

One man he has gained the attention of is Conor McGregor teammate and arch Twitter protagonist Dillon Danis, who took to the platform to claim he could submit Chimaev “easily”.

That drew a withering response from the fighter known as ‘Borz’ – or ‘wolf’ in his native Chechen – who said he would “smash Danis with his eyes closed.”

I smash you with my eyes closed!!!

Chimaev, who now fights out of Stockholm, Sweden, having moved to the country at the age of 19, may be modest in displaying his financial ambitions but is distinctly less shy when it comes to his fighting prospects.