Khamzat Chimaev has posed with Dana White after likening the UFC president to James Bond for his part in securing his US visa, with White admitting that he has made an exception by lining up multiple fights for the rising star. 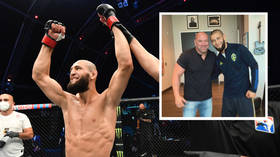 Unbeaten Chimaev claimed White was “the new James Bond” and marveled that “nothing is impossible to him” after his application for a visa to fight in the US, which the UFC supremo had previously admitted was proving tricky to arrange, materialized last week.

The Chechen-born powerhouse will take on Gerald Meerschaert in what is likely to be the toughest test of his career so far as a result, and he has met White in person for the first time ahead of his return to action in Las Vegas a week on Saturday.

UFC Fight Night: Overeem vs Sakai recently wrapped up on September 5 and saw certain unprecedented changes. The fight card was whittled down to just seven fights because of last-minute cancelations taking place. Not to mention, a seven-fight card was last seen all the way back in 2005 at UFC Fight Night 2 in October.

“Finally, I got to meet this legend and spend some time with him,” Chimaev told his following of more than 462,000 on Instagram, sharing a shot of him after his first Stateside training session in a Sweden training shirt – the country where he is based.

“The future is bright and I’m more motivated than ever. Thank you to all at the UFC for welcoming me.”

Chimaev has prematurely ended all of his eight professional fights, and his ten-day turnaround for his two debut UFC wins at ‘Fight Island’ has persuaded White to agree to line up his next opponent in advance.

The 26-year-old will face Demian Maia in Abu Dhabi in October, repeating his approach of moving between weights by switching to welterweight after taking on Meerschaert at middleweight.

Meerschaert appeared to have been riled by the double-booking, accusing Chimaev of being over-hyped and pledging to ensure he was in no fit state to return to action in October after their fight next week.

“The thing is, the guy wants to keep fighting,” White explained, discussing whether the move could be seen as disrespectful to Meerschaert. “He wants all these fights back-to-back.

“It’s no disrespect to his opponent – he’s either gonna win or lose. That has nothing to do with us. That’s up to them. But to do that, really fight two fights in a row, you have to book them.

I am @ufc . Now I’m gonna smash everybody!

“I would never do that for somebody else. I’d be like, ‘Relax, let’s see if you get through this fight.’ But from what I’ve seen from him, I’m willing to do that with him.

“It’s fascinating. We’ve never really had anybody who is doing anything like he is right now. I can see why you would say, ‘Don’t you think it’s disrespectful to be booking a fight for him when he’s already got a fight?’ But that’s how you have to do it.

“It’s interesting. I like it and I’ve never had a guy like this, so it’s fun. I’ll play this game with him. After what I saw in his first two fights, he fought real guys. He didn’t fight chumps. This isn’t a guy who blew through a couple of setup fights. He beat real people. I’m going to see how it plays out.”