Chelsea coach Frank Lampard has spoken with glee about his first five days with new $100 million midfielder Kai Havertz, praising the 21-year-old and fellow German newcomer Timo Werner ahead of the return of the Premier League. 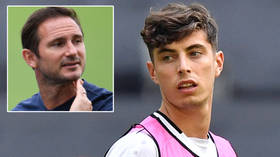 Chelsea ended their long pursuit of one of the stars of the Bundesliga last season by signing Havertz last week after drawn-out negotiations between transfer chief Marina Granovskaia and bosses at Bayer Leverkusen.

Havertz has had to hit the ground running under the watch of Lampard at Chelsea’s Cobham training complex, where he has been preparing for a Premier League season that starts with a trip to Brighton on Monday.

“On his personality, I have been absolutely overwhelmed with how humble and down to earth he is and how well he wants to do here, and how he is very excited with the challenge,” Lampard told Chelsea’s website.

“He wants to come here and be a top player for Chelsea and really prove his talents on this stage.

“That to me has been one of the most exciting things – not just to be excited about him arriving as a top talent, but to see his mentality as he has come in. That gives a really good feeling about how his career is going to be at Chelsea.”

Lampard admitted he had compared notes with Havertz on the art of being an attacking midfielder and a creative and goalscoring force, hoping that the top prospect can emulate at least some of the success that made him a club legend during his 13 years as a player at Stamford Bridge.

“He has great talent on the ball, his productivity is brilliant in terms of goalscoring and assists and physically he is great in terms of how he can get around the pitch,” said his new manager, comparing his size and qualities to former Chelsea and Germany captain Michael Ballack.

“All those things come together but I emphasise we do need to give him time. But I am really excited about what he can do.

“Michael Ballack was a a good player for us in terms of what he contributed and we have all got really good memories of Bally when he was at the club and what he did for us, but Kai is going to be his own player and his own person.”

Leipzig leading marksman Timo Werner, who was only outscored by the unstoppable Robert Lewandowski in the German top flight last season, arrived in June for $59 million, and Lampard is equally impressed by the striker’s early days at Roman Abramovich’s club.

Lauding the 24-year-old Germany striker’s “humility and desire”, Lampard predicted that he and Havertz will make a good match.

“That relationship will be something that I will certainly promote between them, giving them the freedom to work together,” he said.

“That communication on and off the pitch will hopefully help bring the best out of them.”