Russian former world number one tennis player Maria Sharapova has recalled her horror at having to tell the world that she had tested positive for a banned substance in 2016, saying that her ordeal turned her into a “fighter”. 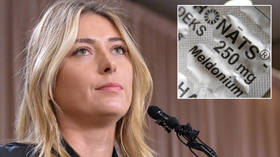 Sharapova was initially banned for two years for testing positive for meldonium, a substance that increases blood flow and was only manufactured in Russia and the Baltic states at the time, at the 2016 Australian Open.

The five-time Grand Slam champion said that she had used mildronate, which contains meldonium, as a health rather than performance-enhancing substance, adding that she had been taking it on the advice of a Russian doctor during years of testing before it was deemed illegal.

Recalling her press conference to announce the ban in March 2016, Sharapova told Movistar: “That morning I woke up and felt like I was preparing for a game. It is very hard to think that you have to face the world and say that you have screwed up everything.

“My mother…spent weeks sleeping with me so that I was accompanied.

“My father also accompanied me a lot to make sure that nothing went wrong, that I didn’t start blaming others.

“You had to take control and know that you screwed up.”

Sharapova returned in April 2017 after her ban was reduced to 15 months, maintaining that she had taken mildronate because of a magnesium deficiency and a family history of diabetes.

She said she only discovered what meldonium was after an unusual email from the International Tennis Federation (ITF) informing her of the violation for meldonium, causing her to discover that mildronate was as a version of the substance when she looked in a reference book.

“When I was young, I noticed that my health was suffering,” she explained. “So my father looked for a personal doctor in Russia.

“Although we lived in the United States, he was safer talking to a Russian doctor, but that doctor had no experience with athletes.

“He did a lot of tests and made a list of medicines that he could take, and with the problems that I started having since 2006 – falling ill – he told me that I could take mildronate, which in Russia is taken like aspirin.

“I took something completely legal for many years. It was painful and violent [to be banned].

“I felt very vulnerable. I want to be respected.

“I fight for what I consider my right and my voice. At those moments I was myself, I was a fighter.

“After [my appeal], I felt free. The court did not agree with the ITF. I did not hide that I was taking meldonium.”

The retired 33-year-old made her remarks as part of a documentary on her life, ‘The Point’, which premiered earlier this week.