Fresh from signing a record $365 million extension with the Los Angeles Dodgers this week, star outfielder Mookie Betts has reversed his decision not to kneel – putting him on a collision course with US President Donald Trump. 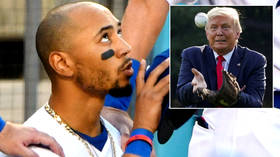 Betts reversed a pledge not to kneel during the US anthem before the Dodgers took on the Los Angeles Giants yesterday, saying that he “needed to be educated on the situation” as he made the symbolic anti-racism gesture alongside nearly every other player and coach before the 8-1 win for his team.

The 27-year-old, whose new deal includes a record $65 million signing bonus and adds up to $392 million alongside his current one-year, $27 million deal, said he would never kneel during the anthem because of his Air Force veteran father four years ago.

“I wasn’t educated,” he said on the same week that the movement’s most high-profile critic, President Trump, claimed he had agreed to throw out the ceremonial first pitch at a New York Yankees game next month.

There is something beautiful about Mookie Betts signing a contract for $365 million for the next 13 years yesterday and then taking a knee during the national anthem today. ✊🏾 pic.twitter.com/01k9Z945wk

“That’s my fault. I know my dad served [in Vietnam]and I’ll never disrespect the flag but there’s also gotta be change in the world, and kneeling has nothing to do with those who served our country.”

Teammates Cody Bellinger and Max Muncy stood next to Betts with a hand on each of his shoulders. “It was just unity,” he said. “We’re all on the same team, we’re all here for change, even the Giants.”

A video in support of Black Lives Matter was shown before the game in a move that would have infuriated Trump, who has called the campaign slogan a “symbol of hate.”

In what could be the last stretch of his leadership, Trump announced that he would be following the longstanding presidential tradition of throwing out the first pitch at Yankee Stadium on August 15 after being invited by team president Randy Levine.

Trump said he had accepted the offer and asked Levine how the crowd would react to his appearance in an election year when his approval ratings have reportedly slumped, to which Levine apparently replied: “You don’t have a crowd. There’s no such thing.”